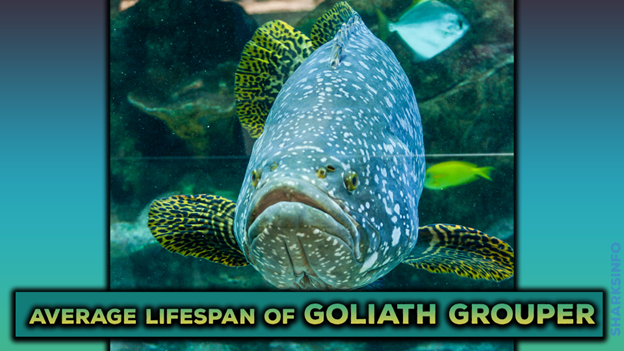 There are a few things that make the Goliath Grouper particularly fascinating. For one, it is one of the largest bony fish in the world, with some individuals reaching over 8 feet in length and weighing as much as 800 pounds. Additionally, it is known to have a very long lifespan, with some fish living for over 50 years and many individuals reaching as many as 100 years of age or so.

Finding out how long an individual species lives would be interesting. Let’s check out.

What is the average lifespan of goliath grouper?

Goliath groupers reach 8.2 feet in length, making them the largest grouper in the western Atlantic. The average life expectancy of a goliath grouper is around 30 years. According to records, the oldest certifiable specimen of goliath grouper is 37 years old, but its specimen was taken from a population of individuals impacted by fishing pressure. It is probable that goliath groupers may live many years in the wild, perhaps even 50 or more years.

It typically takes four to six years for males to reach sexual maturity, and they grow to a length of 110-115 centimeters in that period. The sexual maturity of females is reached between the ages of six and seven when they are 120-135 cm in length.

In the first six years of life, the average growth rate is roughly 10 cm per year, and it declines to 3 cm per year by the time they reach the age of 15.

Having learned the average lifespan, let’s take a look at some of their characteristics. Let’s begin with the scientific taxonomy of the species.

What is the habitat of Goliath Grouper?

The waters around Florida and the Gulf of Mexico are among the best places to catch Goliath groupers. In addition, they can be found in the Caribbean Sea, the coasts of Senegal, and as far as Brazil. Rocky reefs, wrecks, and offshore oil platforms are generally where adults can be found. Although the species can also be found in coral reef habitats, rocky reefs have a greater abundance of the species.

There is a high risk of rapid population decline of Atlantic goliath groupers due to overfishing and exploitation of their habitat. As of now, the species is registered as vulnerable by the IUCN.

With a lifespan of 30-50 years, giant groupers are among the longest-living fish species. However, they are not immune to the effects of overfishing and habitat loss, and their numbers have declined sharply in recent years. If we want to protect this species, it is essential that we reduce the pressure on their populations by fishing responsibly and preserving their natural habitats.