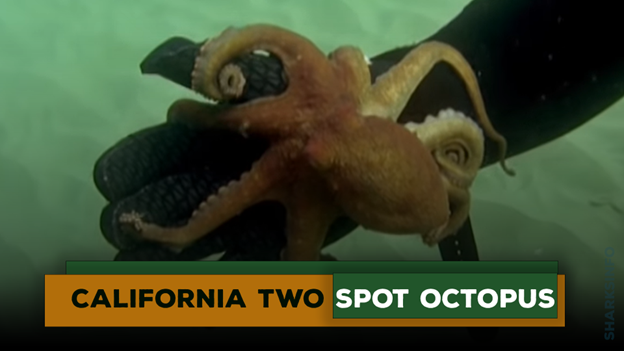 Among the types of octopuses we see around, the California two-spot octopus is the most incredible of all, whether you talk about its distinctive appearance or its intelligence. As fascinating as it is, humans often find it hard to come across this species since they spend most of their time on the sea floor. However, it does not end the drive to get to know more about this implausible animal.

With that said, we have all the right information gathered at one point that you must know of this species of octopus. So, without a minute more, let’s get to know all about it.

Everything you need to know about California Two-Spot Octopus

For more details on the species, let’s continue to read to the end.

The Two-Spot Octopus has eight tentacles attached to a soft body, which is generally similar to that of other octopus species. In order to find food, it hides or crawls slowly or quickly on the seafloor using its arms and suckers. The body of this creature is decorated with two blue spots resembling eyes on either side of the body, which is what makes them distinctive.

It can be found deep in the subtidal waters, up to 65 feet in depth. Warm waters, ranging from 65°F to 75°F, are perfect for the Bimac to thrive. Their favorite areas are also those where they can hide in rocks and crevices.

Blue spots around the eyes define this octopus as distinct from others. A predator is believed to be deterred by these two spots that resemble their eyes. There is usually no heavy texture to an animal’s overall coloring, though the color varies greatly based on the habitat it lives in.

Approximately seven inches is the average size of the bimac’s mantle. With arms measuring up to 25 inches long, this creature has an impressive reach beyond itself.

Known as tactful hunters, Two-Spot Octopus, with excellent eyesight, feed on other sea creatures primarily at night. A large portion of their diet consists of smaller crustaceans, mollusks, and shrimps.

It is no surprise that the octopus matures quickly, given its short lifespan.

According to the IUCN, California Two-Spot Octopus is classified as Least Concern.

California Two-Spot Octopuses are one of the friendliest species of octopuses, and if properly cared for, they make good pets as well. It is native to the coastal areas of California, where it can be distinguished by its circular blue eye spots on each side of its head.