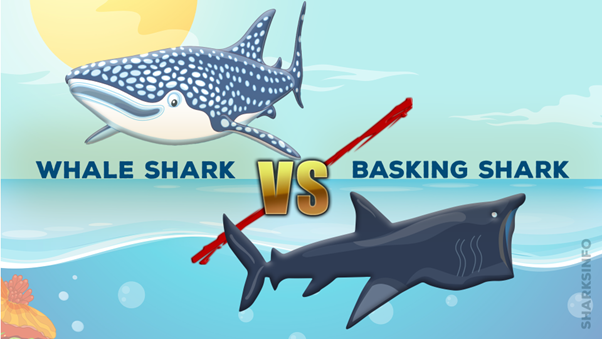 When we hear the word “shark” the image of a giant ocean creature automatically strikes our thoughts. In this article, we are focusing on the most enormous creatures of the ocean – The Baking sharks and The Whale sharks. Well, both species are somehow related to each other like both are filter feeders, both live deep in the oceans, and are known to be non-aggressive species of sharks. Despite their resemblance, these species also differ from each other in several ways. In this article, we are going to elaborate on the different facts which make them different from each other.

Both Basking sharks and Whale sharks belong to Class Chondrichtytes and are the biggest species of sharks but the two species differ from each other in many ways which are given below:

Basking sharks and Whale sharks are not nasty predators both of them prefer to live without bothering their environment. Both are filter feeders and vicious hunters. But despite their similarities, these species differ from each other in many ways. We attempted to highlight the key difference between them so that you will better understand the two giant creatures of the ocean.