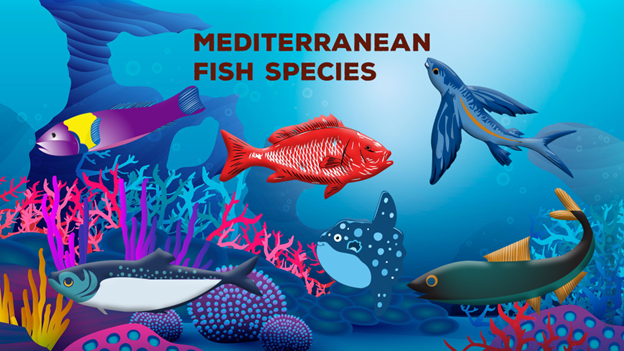 Diversity in the Mediterranean Sea

As mentioned earlier, the Mediterranean Sea abodes a variety of fish species. Almost 500 native fish species exist in the Mediterranean Sea right now, with over thousands of different marine animals that swim here and there. There is a long list of marine fishes, among which a few very famous are going to be discussed with their unique features later in this article.

As its name refers, it is a fish with a rainbow color external appearance. It is an edible fish that, on confronting any danger, buries its entire body. It is hermaphrodite and can change its sex whenever it wants.

Unlike what its name shows, it is purely native to the Mediterranean Sea. It is a fatty fish with an external appearance having dark stripes, a blue body, and a prominent sail-fin.

Mediterranean Sea Bass or Branzino, or European Sea Bass, is one of the most usual Mediterranean Sea that is famous for its delicate taste. Because of its high demand in the market, it is quite costly to have a dinner menu that includes this delicious fish.

Picarel or Whitebait is very frequent in the Mediterranean Sea as well as the Atlantic Ocean and the Black Sea. Picarel is small in size and the dweller of the sandy sea bed.

The flying fish has evolved with its flying ability just to save itself from the dangerous predators of the marine world. It is one of the very usual types of fish that has a torpedo-shaped body with some oversized pectoral fins. It is adapted to swim at the speed of 65 Kilometers per hour before lunching and can fly up to 655 feet.

Sardine is yet another common fish existing in the Mediterranean Sea, which is small in size and gives a delicious taste. Due to its low price, it is often known as the poor man’s fish.

The Red Porgy specie also includes in the list of common Mediterranean Fishes. Externally, it is silvery-rose in color, which gives it some mesmerizing features. Because of its external beauty, it is available in the market at far greater prices than other fishes.

The European Anchovy is an extremely important fish in maintaining the Ocean’s Ecosystem. With the ease of their fanatic activity, they cause the Earth’s water to move, bringing up all the essential nutrients while regulating the temperature of the water.

With its unique and huge external body features, the Ocean Sunfish is the strangest yet one of the most massive Mediterranean fish. As its name shows, it dwells on the surface of ocean water, and it can be found easily basking in the sun.

While attaining evolution and variations, the Ocean Sunfish slowly and gradually lost its tail and evolved a new external feature that is the “lumpy pseudotail.”

The Mediterranean Sea has become a hot spot for a variety of marine creatures because of its warm temperature, gentle currents, and a huge source of potential nutrients. Among the long list of diversified Mediterranean fishes, few have got a chance to appear in this article. Some of them are very rare, whereas others rule the Mediterranean Sea. Some are very strange to look at, while others resemble other common fish species. Some are famous for their incredible beauty, whereas others are very delicious to taste. All of these species can be easily identified with their prominent identification features mentioned in this article.