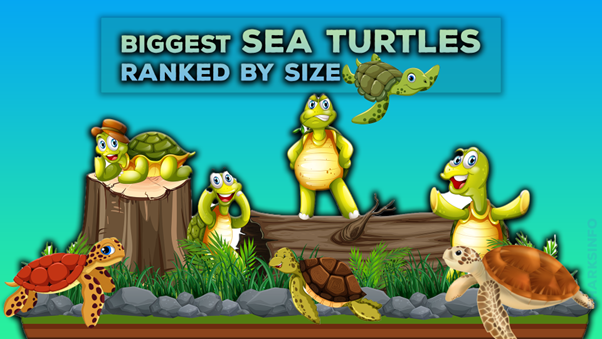 Sea turtles are one of the ancient species of reptiles which have been thriving on the planet since the time of dinosaurs, The fossils record of Sea turtles depicted that they have been living here for almost 220 million years. There are several species of sea turtles that can grow to a remarkable size which makes them the largest species of the turtle family. In this article, we are going to explore the detailed description of the world’s largest sea turtles.

Sea turtles are of different sizes, some are small in size, that you might enjoy in your dinner whereas some can reach a remarkable size. They are ranked based on their size and are listed here:

Sea turtles are known to be one of the most ancient species of the open waters, which somewhat shares a history with the dinosaurs. Well, the species of sea turtles vary in length as well as size. Depending upon their size, the largest sea turtle is the Leatherback Sea turtle ever recorded, and descending, the smallest is the Cayman turtle. Commonly, all sea turtles are herbivores and feed on seagrasses as their primary source of food.