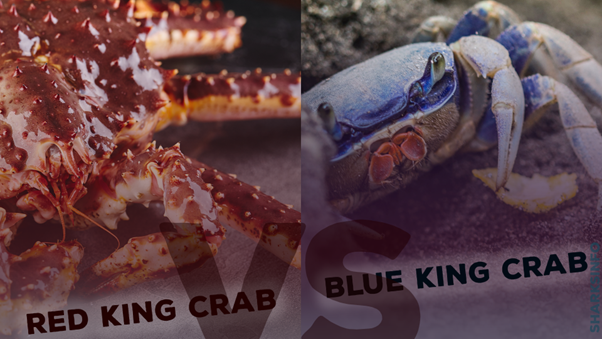 King crabs are one of the most famous crabs in the world, known for their exquisite taste and variety of coloration. They are found near the region of Alaska and are devoured by people as seafood. The red king crab is undoubtedly the infamous one. But you must’ve noticed that blue king crab is enjoyed by people too. So, are there any significant differences between these two species to look out for? Let’s take a look.

One of the infamous crab specie which is commercially harvested at large due to its savory taste, the Red King crab is also known as the Alaskan King Crab. They have distinctive claws as one of their claw is large, which they use specifically to crush their prey. It is a decapod means it has ten legs. It is an omnivorous organism as it prefers to hunt invertebrates as well as feed on plants or decaying matter.

As they belong to the same family as Red king crabs, they share a number of physical similarities with them especially anatomical features, as both are decapods with various shaped claws. Their exoskeleton is full of spines that protect them from potential threats and predators. They were also harvested at large for commercial purposes but their number has declined rapidly over the past few years.

Following are some of the major differences that tell apart both species.

Despite these differences, these two species share a number of similarities as they both are omnivorous, follow the similar mode of reproduction i.e., internal fertilization and are decapods. That could make it difficult to tell them apart, but by looking closely at them while keeping the above features in mind, it is possible to distinguish them.

Though both, red king and blue king crabs belong to the same genus, they do differ in terms of color, size, taste, worth, and physical appearance. These crabs have been serving the tastebuds of humans for so long, but their overharvesting has caused a serious decline in their number which is alarming.