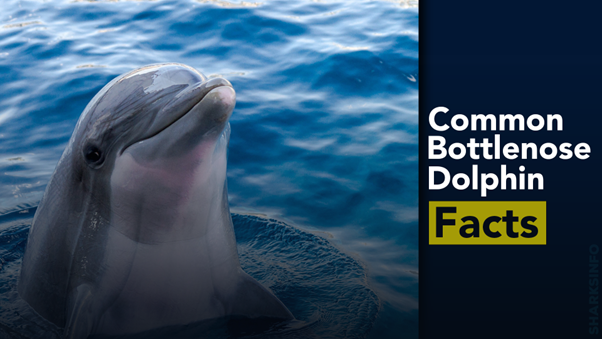 A common bottlenose dolphin is a mammal, also known as the Atlantic bottlenose dolphin. It is common in the temperate and tropical waters of the world and is commonly seen jumping out of the water. They are considered a highly intelligent species that’s why are species of interest to humans. Here is their fact and information guide.

The bottlenose dolphins are known so because of their remarkable snout which is short and thick resembling the appearance of a gin bottle. The coloration of their bodies is somewhat a mixture of gray, white, and black. Their skin is rubbery and smooth in texture. They have two flippers and one triangular fin on their back.

The average length of a bottlenose dolphin is between 6-13 feet and it weighs around 300-1400 lbs. In terms of weight, it is observed that males supersede females.

Over the globe, the Common Bottlenose Dolphin has been wide in distribution except in the Arctic and the Antarctic regions because of the low-temperature conditions. They are found living in the warm and temperate waters of estuaries, freshwater rivers, and shallow bays. They are highly migratory species that travel a long distance of 2,600 miles in one season.

Bottlenose dolphins are mammals, and like all other mammals, they undergo internal fertilization. The mating mostly happens during spring. After the gestation period of 12 months, the female produces one calf per pregnancy. This calf is fed and nourished until it becomes 20 months old. The breeding happens every 3 to 6 years.

The average lifespan of bottlenose dolphins is 17 years but they are known to live as much as 40-50 years depending upon favorable conditions.

The common bottlenose dolphin due to their migratory behavior thrives in many areas of the ocean and thus feeds on a variety of food. They are known to be opportunistic feeders and feed on the following food items.

Bottlenose dolphins look cute to swim with, however, they are known to bite humans with their 80-100 teeth which they use to grab their prey. There is a number of reported attacks of bottlenose dolphins on humans, thus concerned authorities have shared warnings again and again. But one should keep in mind that these creatures do not bite unless agitated or provoked.

The bottlenose dolphins’ population is in danger because of human activities and environmental stresses including sea pollution, toxins, ship strikes, recreational fishing, oil spills, and the loss of habitat due to climatic changes. All these reasons combine, pose a serious threat to their survival.

Bottlenose dolphins are considered to be in the top tier of the predators in the ocean, thus, their own predators are very few including killer whales (orcas) and sharks only.

According to IUCN, the population of bottlenose dolphins is stable, thus it is categorized as Least Concern in the red list.

The common bottlenose dolphin is a mammal belonging to the family Delphinidae, having a short snout with a gray and black colored body commonly found in temperate waters. They are pleasant to look at due to their smooth skin and social nature, however, you should always keep a safe distance from them as they are known for biting humans.