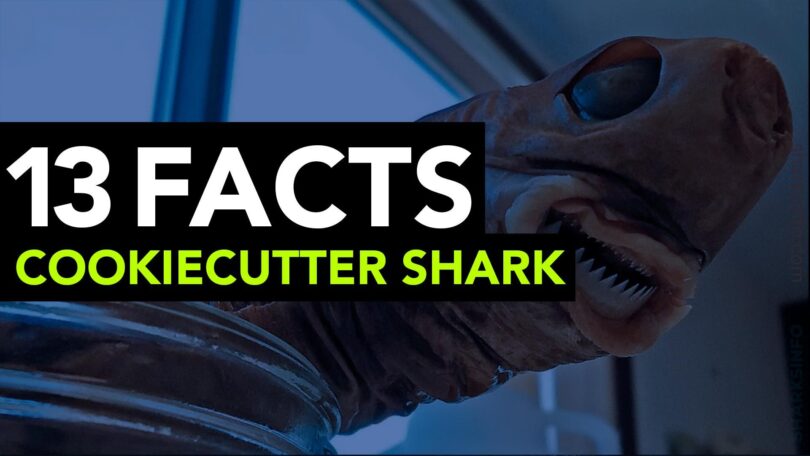 The cookiecutter shark is one of the most intriguing sharks in the sea, reaching to only 18-20 inches in length (50 cm). Its common name comes from its eating habit, which involves chewing off small pieces of much larger species.

This species is quite small and spends most of its life in the deep water column (mesopelagic). As a result, it is difficult to study, and little is known about its habitat, but it has been collected or observed in a variety of locations around the world, most notably in tropical to temperate latitudes.

The cookie-cutter shark can also be found in the Indo-Pacific waters around the coasts of Mauritius, New Guinea, Lord Howe Island, and New Zealand, as well as north to Japan and east to the Hawaiian Islands. It can be found off the beaches of Easter Island and the Galapagos Islands in the eastern Pacific Ocean.

They consume smaller creatures whole (like squid), but they also take enormous, round cookie-cutter-shaped pieces out of larger species like tuna, whales, dolphins, and seals. To feed on prey, it attaches itself to its prey and cuts perfect chunks out of the prey’s flesh using its serrated teeth.

Here are some intriguing facts about cookie-cutter sharks.

The entire underside of the cookiecutter illuminates thanks to photophores, which are light-emitting organs in its skin. Some researchers believe sharks employ bioluminescence to blend in with the moonlight, while a dark, unlit collar around its throat, resembling a fish, attracts prey from the bottom.

Cookiecutter Sharks got their name from the cookie-shaped bite marks they inflict on their prey. These spherical chunks are formed by the shark’s distinctive teeth and short, coned snout. It will suction its lips to the body of a tuna, marlin, stingray, another shark, or even a whale to attach itself. The shark then twists its body, using its lower set of serrated teeth like a can opener to take a chunk of meat, resulting in a wound worthy of the shark’s name.

They have three scientific names. When the shark was discovered in 1824, it was given the name Tristius brasiliensis, then Scymnus brasiliensis, and ultimately Isistius brasiliensis. It is named after Isis, the Egyptian goddess of light. And the species’ name refers to one of its known locations, off the coast of Brazil.

Male Cookiecutters mature at around 36 cm (14′′) and females at around 40 cm (16′′). This species is ovoviviparous, meaning it gives birth to pups inside egg cases within the mother. Each litter contains 6-12 live young, born between the ages of 12 and 22 months. They are fully formed at birth and can hunt.

Not only does the produced glow attract fish, but when viewed from underneath, the dark patch on the shark’s ventral skin mimics a smaller fish. This sign is thought to attract larger fish and other possible prey that might be swimming beneath it.

Unlike other sharks that shed their teeth one at a time, the Cookiecutter Shark sheds all of their teeth at once. It even consumes the bottom row. All of them, from 25 to 31! It is thought that this is done to deliver calcium to the body. Cookie cutters contain 30 to 37 tiny upper teeth as well.

The Cookiecutter’s big eyes allow it to visually lock onto its victim long before it physically does. Unlike other sharks, the Cookiecutter Shark’s retina includes ganglion cells in a circular area (rather than the conventional horizontal streak), which may explain why it has remarkable binocular focus.

During the day, the fish lives at depths of 3200 feet, but at night, it migrates vertically to feed.

Tuna, stingrays, other sharks (even great whites! ), seals, whales, dolphins, and other large creatures are common prey for sharks.

The Cookiecutter Shark has been seen at schools. This could be another reason they are so efficient at attracting prey—and less likely to be preyed upon!

A huge, greasy liver fills the Cookiecutter Shark’s extended body cavity. In fact, the liver accounts for over 35% of the body’s entire weight! Because of the low-density oils in the liver, this shark has relatively neutral buoyancy, allowing it to travel easily through a wide range of depths with minimal energy loss. In other words, it can stop swimming at any time and will not sink!

Male Cookiecutters reach a maximum height of 16.5 inches (41.91 cm), while females reach 22 inches (55.88 centimeters). Despite its small, it frequently hunts larger species such as whales and seals. It is not known to attack humans, and there has only been one documented occurrence of a Cookiecutter bite on a human in recent history.

Cookiecutter Sharks have distinct characteristics ranging from the shape of their bites to their feeding patterns to their mischievous tendencies! While they are not listed as endangered, we must conserve their habitats and food sources lest they end up on the list like many of their shark cousins.