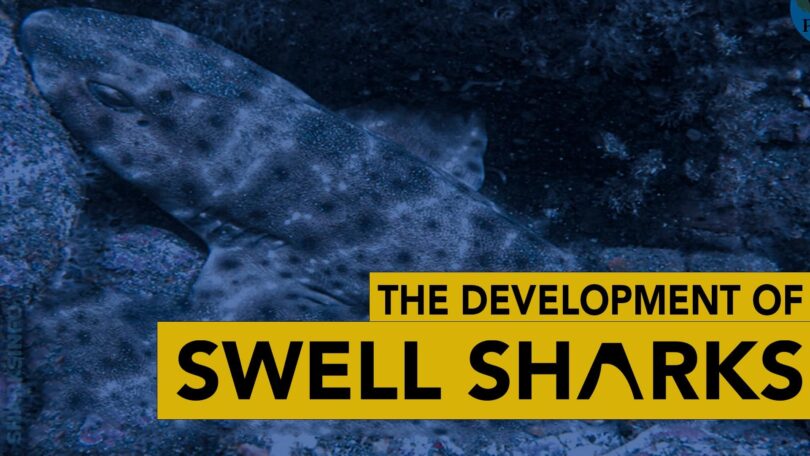 Swell sharks are small, passive sharks that are widespread in Southern California waters. The common term comes from their capacity to engorge the stomach with water or air to nearly double its natural size when threatened. They are commonly found in kelp forests with rocky substrates, where their drab hue allows them to camouflage. These sharks make an effort to avoid divers and snorkelers.

Let’s take a look that how these sharks reproduce and develop into young ones.

The swell shark has a powerful body and a large, flat head. The snout is short, and the mouth is large and extends behind the wide oval-shaped eyes. This shark’s mouth is proportionately larger than the white shark’s mouth. The lower eyelids are nictitating. The gill slits are extremely tiny. The first dorsal fin is located far back on the body, behind the pelvic fin origins. The claspers are long and thick.

The Development Of Swell Sharks

Female swell sharks are oviparous, which means they lay eggs that mature and hatch outside of the body. Females can lay up to four eggs at once and prefer to do so among rocks and algae. A big yolk within the eggshell gives 100% of the nutrients to the developing embryo.

They even have external gills in their early stages of development! Swell shark pups normally require 9 to 12 months to fully mature; however, this time span is sometimes affected by water temperature. Swell shark pups will acquire two rows of larger dermal denticles on their back while still in the egg case to aid in the hatching process.

These expanded denticles facilitate the shark’s escape from the case! Puppies are just approximately 6 inches long when they initially emerge from the egg casing. Once they hatch, these puppies are completely self-sufficient and must forage for food, such as benthic invertebrates, on their own.

Empty egg casings of swell sharks were thought to be mermaid purses in ancient folklore.

Why They Are Called Swell Sharks?

Swell sharks are named so because of their defense mechanisms. The swell shark has an interesting reaction when threatened. It forms a U with its body, grasps its caudal fin in its mouth, and consumes a considerable amount of seawater, causing it to inflate to double its regular size. This characteristic makes a predator’s bite or eviction of a swell shark from its rocky crevice difficult.

The swell sharks are oviparous, the females lay eggs that get matured and hatched outside the body. On average, a female can lay as many as 4 eggs. Once the eggs hatch, the young ones are on their own, that’s why, swell sharks have a special mechanism for defense where they fill themselves up with water, making it hard for a predator to take a bite.