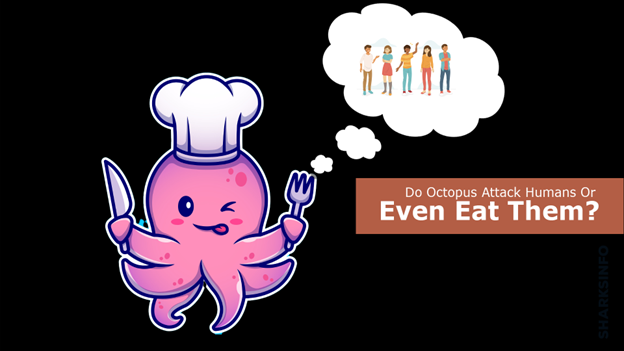 Will an octopus attack a human?

It is usually only when an octopus feels threatened that they attack humans. They are typically not naturally aggressive creatures. It is possible that some individuals of the species, such as the giant Pacific octopus, are more likely to attack humans than others due to their curious nature and complex social behavior.

Octopuses are also recognized to be territorial species. If an octopus feels that its territory is being encroached upon, it might attack the offender in order to drive them away.

Does an octopus eat a human?

Talking about the giant Pacific octopus, despite their size, they exhibit high levels of intellect and amiability. Although they have the capability to harm humans, they have not yet caused any loss of life.

Despite their reputation for biting humans if mishandled or if threatened, octopuses are not known to eat humans.

In case you encounter an octopus in the wild, it is best not to bother it and avoid handling it unnecessarily to avoid being bitten or attacked.

What do octopuses eat?

Octopuses are carnivores that primarily eat fish. The diet, however, typically consists of crabs, shrimp, clams, and other small mollusks. Octopuses usually hunt in darkness, using their critical sense of sight and smell to locate prey. They use their beak to wound and gash their prey into small chunks that they can then devour. An individual can devour as much as 1/3 of their body weight in a single day!

Octopuses will also scavenge for food if necessary and have been known to eat their own arms if starving.

What makes the octopus dangerous?

Sea creatures such as octopuses are regarded as cute, colorful, and extremely intelligent. However, at the same time, they are capable of harming humans, and you need to look out for them when in water. While octopus attacks on humans are not common, they can happen. However, even if the attack happens, octopuses aren’t likely to eat humans. When encountering an octopus, avoid any attempt to interact with it.