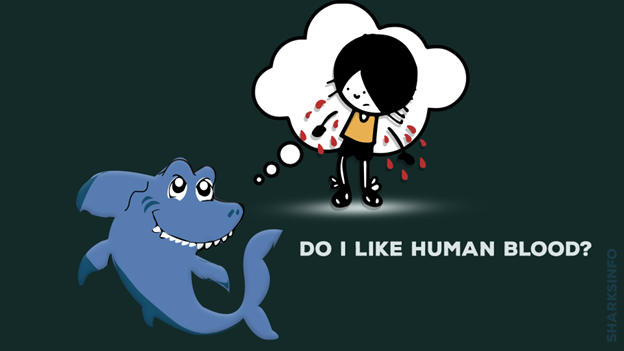 When you’re hurt or bleeding, the most prominent and clear warning sign you see at the beaches warns you not to enter or even approach the water. There live creatures in the marine world that are portrayed as man-killers, bloodthirsty monsters, or mindless hunters. Known as sharks, they are surely apex predators of the ocean and dominating the water world for thousands of years.

The movies like “Jaws” has portrayed a similar concept that sharks are attracted to blood, and they are likely to target humans. How true that is, and if sharks like human blood, we need to find out.

No one can deny the fact that sharks possess some exceptional quality senses. Whether it is about smell or detecting electric fields, they have got an amazing bunch of sensors in their body. But do sharks actually like human blood in the real sense? Let’s find out.

Is human blood tasty to sharks?

Though sharks have the ability, and all thanks to their exceptional senses, that they can detect the smell of blood from miles away, they are not attracted to human blood. If a shark sees a fish or sea lion bleeding, it is more likely to attack that animal than a human with a wound.

With that said, sharks associate blood with an easy meal since blood in the water often means there is a wounded animal nearby. It is possible for sharks to draw attention to blood, and this can be dangerous for humans, as it can make them more likely to be attacked by a shark. So, if you are swimming in the ocean, it is best to avoid bleeding in the water just to be safe.

Sharks have an acute sense of smell and can perceive even minuscule amounts of chemicals in the water. This allows them to track their prey from long distances away.

Sharks can smell different types of chemicals, including those that indicate the presence of food. For example, sharks can smell the amino acids in fish blood from over a mile away. The same goes for the blood. Some sharks can also smell electrical fields. Even when prey is hidden, they can sense its presence.

How do sharks react to the smell of blood?

Sharks have an acute sense of smell, and they will immediately draw to the location where the blood is; however, they do not like human blood as much as any other marine creature. The danger of attracting sharks to you is not feasible at the same time, so you should avoid swimming if you are injured or bleeding.