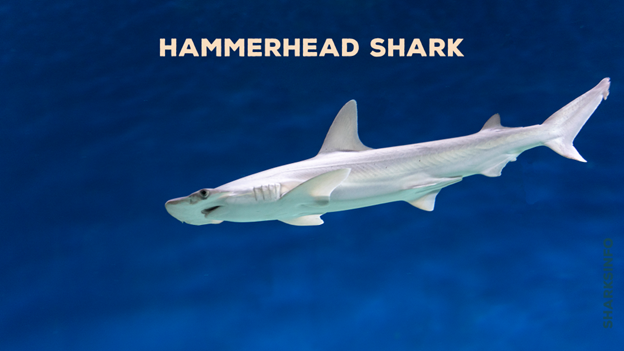 Among all the species of sharks found in the world’s oceans, the most easily recognizable are the hammerhead sharks; even kids can identify them. Their heads are shaped like hammers, explaining their exceptional appearance. Whether you call it the strangest creature in the oceans or the most speculating, hammerhead sharks are well known for their distinctive characteristics.

Where do Hammerhead Sharks Live?

In warm waters relatively close to shore, hammerhead sharks can be found, although most of them do not pose much danger to humans. Let us first see the scientific classification of these distinguishing species.

There is a total of 10 shark species belonging to this family, out of which 9 belong to the Eusphyra and 1 to the Sphyrna. Following are the details of the species.

The winghead shark is a relatively small species, reaching a maximum known length of 6.2 feet. It has a long, flat, and extremely wide head, with a greatly extended snout. The eyes are trivial and positioned on the sides of the skull, and the nostrils are placed at the tips of the long snout. The mouth is small and contains 26–28 tooth rows in each jaw. Note down the scientific name; as it is the only species belonging to the Eusphyra genus.

The scalloped bonnethead shark is a small member of the shark family, Sphyrnidae. In terms of size, it is one of the smallest hammerhead sharks, measuring up to just over 3 feet in length.

It is a common inshore and nearshore species that inhabits waters over continental and insular shelves, as well as in bays, lagoons, and estuaries. Freshwater habitats are frequented by this species. The scalloped bonnethead is a viviparous species, with females giving birth to litters of four to seven pups.

The scalloped hammerhead shark is a species of hammerhead shark which is characterized by its “scalloped” shaped head. This type of shark is found in humid and subtropical waters worldwide and can develop to be up to 14 feet in length.

The scalloped hammerhead shark is an apex predator and is known to prey on a variety of fish, squid, and other sharks. The sharks of this species are also known to wander long distances in pursuit of food and mates.

The male adults of this little-known species of hammerhead shark measure 90 cm long, while the female adults are 100–132 cm in length. A mallet-shaped head and a moderately broad body distinguish it from other species.

These sharks are found in temperate waters around the ecosphere and can mature to be quite enormous, with some getting lengths of over 20 feet.

Despite their large size, hammerhead sharks are not deliberated to be a risk to humans and are quite shy creatures. However, they are apex predators and can be dangerous if provoked. Their nourishment comprises mainly fish, but they have also been acknowledged to eat smaller sharks, rays, and squid.

This species is relatively small and harmless to humans and is often found in shallow coastal waters. The bonnethead shark is an opportunistic feeder, and its diet consists primarily of small fish, squid, and lobsters.

The smooth hammerhead shark is a predator, feeding on a range of fish, squid, and other sharks. It is known to be a relatively aggressive shark and has been known to attack humans.

Whitefin Hammerhead Sharks are considered among the rarest sharks, and they remain so to a certain extent. In spite of the Whitefin’s fascinating nature, it turned out to have morphologically little different from the Scalloped Hammerhead Shark (S. lewini).

Sharks are among the fascinating creatures of the ocean, and when it comes to the hammerhead species, it becomes more intriguing since these species hold distinctive characteristics. As of today, there are 10 known species of hammerhead sharks, out of which 9 belong to the genus Sphyrna and 1 to the genus of Eusphyra.