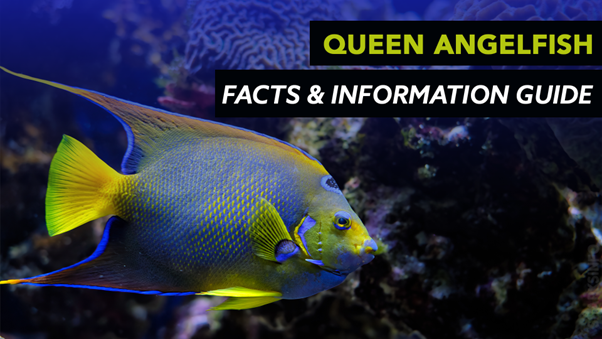 Considered one of the most beautiful fish in the ocean, the queen angelfish, known as yellow angelfish or golden angelfish, is definitely worth a sight. Its compressed but blue and yellow colored body works as eye candy for humans, that’s why they are kept as aquarium pets in abundance. Queen angelfish are of solitary nature, usually found swimming alone. Let’s explore more about this adorable marine specie.

Queen angelfish have flat, compressed bodies with a rounded heads. Their distinctive feature is the presence of a blue or black spot on top of their heads, which are considered their crowns, thus the name Queen Angelfish. They have wet and slimy scales on their bodies and have small mouths which contain brush-like slender teeth.

Queen angelfish prefer coral and rocky reefs for their living habitat. Queen angelfish are found in abundance in the Caribbean waters. They are limited to the waters of the tropical western Atlantic right from Bermuda to Brazil as well as from the Windward Islands to Panama.

The adult queen angelfish can grow upto 18 inches and weigh around 1.6 kg

Just like Blue Tang, the Queen Angelfish also reproduces via the “Broadcast spawning” method. They prefer monogamy as the pair can be seen together for a long time. Both males and females rise up in the water from reefs, bring their bellies to close, and release a spawn of eggs and sperms.

The released eggs are transparent and buoyant which allows them to float in the water column, saving them from the attacks of the predators. After fertilization, the egg hatches in 15-20 hours into larvae and within the next 48 hours, the larvae develop by absorbing the yolk sac. These larvae feed on plankton until they become adults.

The average lifespan of queen angelfish in the wild is upto 15 years.

Queen angelfish are omnivores who like to feed on a variety of invertebrates. In their habitats, they mainly feed on sponges as well as algae, jellyfish, tunicates, sea fans, plankton, hydroids, anemones, soft corals, and bryozoans.

Queen angelfish are kept as aquarium pets as well and in captivity, their diet varies. In captivity, they feed on dried algae sheets, flake food, Mysis and brine shrimp, spirulina, and chopped fish and vegetables.

According to IUCN, the population of Queen Angelfish is stable, thus its conservational status is Least Concern.

Queen angelfish do not bite or attack humans, thus it is not a threat to them. However, its consumption by humans can cause Ciguatera poisoning which affects the muscular, digestive, and neurological systems of humans. That is why it is advisable to avoid eating raw queen angelfish.

Queen angelfish lives in coral reefs and is found in the depths of the western Atlantic Ocean, feeding on algae, sponges, plankton, and anemones. Due to their vibrant appearance, they are loved by humans and are kept in aquariums as a pet. However, their population count is stable even after mass captivation, thus their conservation status is of least concern.