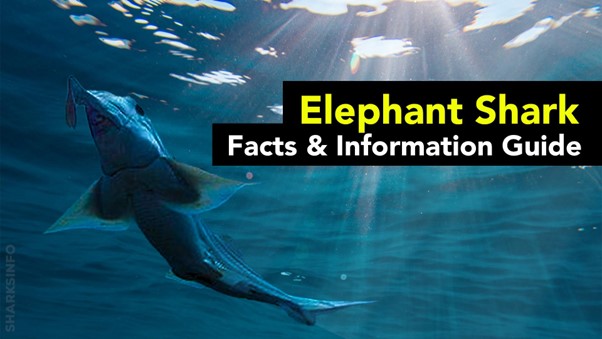 The elephant shark is a cartilaginous fish whose torpedo-shaped body resembles the shape of a shark, thus the name. It is also known as the Australian Ghost shark and is grouped under the Elasmobranchii subclass. They are small and interesting fish, about which people are curious to know. Let us share some details about the Elephant sharks.

Elephant sharks are either blue, black, or brown in color with dark black blotches on the side of their fins. Their most prominent feature is their elongated snout for which they have got their name, the elephant shark. Their skin is smooth in texture, entirely scaleless.

They have a total of two dorsal fins, one of which is present near their head while the other one is near the middle of their back and has a long spine full of mild venom, that elephant shark use for their protection. They have large prominent eyes on their heads which have mixed colors of green and yellow.

The average length that an elephant shark can achieve is 2-4 feet and they weigh around 10-15 lbs. However, it is reported that the larger species may weigh somewhere around 20 lbs or more.

Elephant sharks are often found in large estuaries and shallow bays but can dive deeper with a speed of 2mph and are usually found in the Tasman Sea, the South Pacific Ocean, and the oceans of New Zealand and Australia, where people enjoy feeding on these fish.

As the fish is small in size, the elephant shark enjoys eating the small, soft invertebrates living on the ocean floor. They usually feed on shrimp, mollusk, octopus, shellfish, and small fish. They have large flat teeth which are not adaptable to consuming bony fish, thus they avoid such food.

Elephant sharks observe the oviparous mode of reproduction. The mating happens usually between October to January. The female locates the male for mating using her senses and the male then transfers its sperm into the female using his claspers.

After fertilization of the eggs, the female move to the shallow water to lay the eggs. The egg remains incubated for almost 8 months and during that time its color changes from yellow to brown to black, and finally, the young one hatches from the egg. It takes the male young ones 3 years to get mature while the females mature at the age of 4-5 years.

On average, the elephant shark can live as much as 10 years, but with ideal conditions, it can survive for 15 years as well.

The conservation status of elephant sharks has been regarded by IUCN as the Least Concern.

As elephant shark starts getting older, they get a condition on their skin due to a bacterial infection which shortens their lifespan. Other than that, overfishing for commercial purposes is also causing a decline in their number, though their number is stable now, it can drastically change if proper measures are not taken to conserve them.

Elephant sharks are not true sharks but cartilaginous fish with elongated snouts and black spots on their bodies. They feed on shellfish, mollusk, shrimp, and octopus. They are found in the shallow waters as they lay eggs there and then move to the depths of the ocean. Their number is stable for now, but they are used as food in some countries and it can surely disturb their population count.