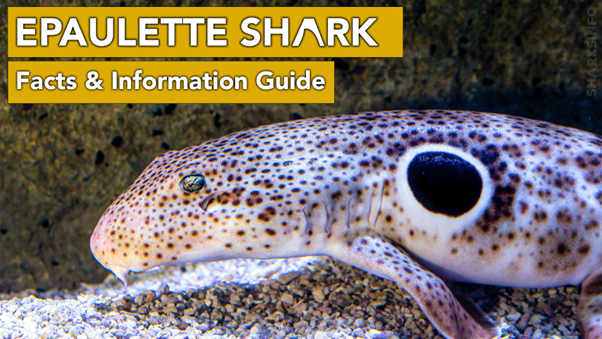 A specie of long-tailed carpet shark, the Epaulette shark can easily be recognized because of the prominent black eyespots, located just behind its pectoral fins. Its behavior and physiological features make it an interesting animal. Here are some facts and detailed information guides about the Epaulette sharks.

Epaulette sharks have elongated yet small and slender bodies. Their snout is short and rounded having nasal barbells underside. The color of the body is brown to creamy having prominent black eyespots with white rings, located right along the edge of the pectoral fins. They also have dark brown spots scattered all over the body, which makes it easy to identify them.

Both pectoral and pelvic fins are paddle-shaped while the caudal fin does not have any ventral lobe and is narrow in shape. There is a total of 26-35 teeth rows held by the upper jaw, while the lower jaw contains 21-32 rows of teeth, which are small in size.

Epaulette sharks’ average size is 27-35 inches, but they can reach upto 42 inches as well. The male counterpart gets mature when it reaches around 1.8-1.9 ft in length, while females get mature at the length of 1.8-2.0 ft but they are able to grow upto 3.5 ft.

Epaulette sharks are very good at finding their food as they have quite sharp eyesight and have electro-receptive signals that sense the electrical currents coming from other animals. They primarily feed on corals and substrates of sand as they are bottom feeders, but they also enjoy consuming small fish, crustaceans, worms, and amphipods. They like to chew their prey for a good 5-10 minutes and only then swallow it.

Epaulette sharks usually hunt for their food at night, as they are nocturnal. However, it has been observed that even during the daytime, these sharks can be seen roaming in search of food.

Epaulette sharks observe an oviparous mode of reproduction in which they follow internal fertilization. During mating, the male is known to stabilize the pair by holding the pectoral fin of the female counterpart in his mouth and then inserting his clasper inside the cloaca of the female. As a result, two eggs are produced which are later released by females in the water.

Released eggs then stabilize themselves along with coral or rocks and after the gestation period of about 120 days, newborn pups of 5.9 inches can be seen. The mating usually happens between July and December, but during captivity, Epaulette sharks do not follow any specific timeline for mating.

Some of the natural predators of the Epaulette shark like sharks, groupers, and other larger fish do pose threat to its existence. However, the overfishing and bycatching of this specie by humans for the aquarium trade is the real threat. The only thing that keeps their population stable is their ability to reproduce efficiently in captivity.

Epaulette sharks are members of the family Hemiscylliidae having long tails, brown-colored bodies, and prominent black eyespots near the pectoral fins. These species easily camouflage themselves in the coral reefs to avoid predators and hunt the food. Though small, these species are highly intelligent with advanced receptors and high tolerance to hypoxia, which make them the best choice for the aquarium trade.