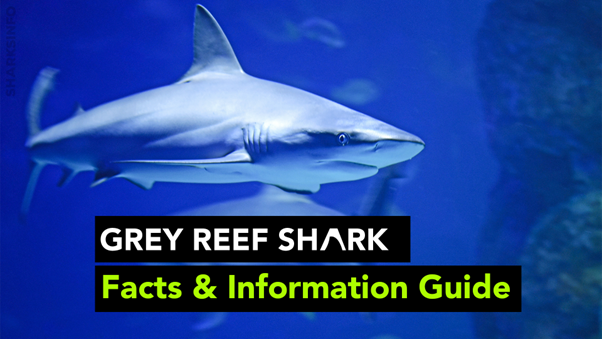 A bit larger member of the reef shark family from the blacktip reef shark, the grey reef shark has a grey-colored, smooth textured body. Grey reef sharks are considered one of the most encountered sharks by divers in the ocean. They approach humans in a friendly manner and divers feel safe swimming around them. Let us share some of their distinctive features with you.

Grey reef sharks have fusiform bodies with grey to bronze coloration. The underside of their body is white and the tips of the pectoral fins are black with the tail having a black band on it, which is used as their identification marks. Their snout is rounded, long, and broad while their eyes are round in shape.

Grey reef sharks have each 13-14 teeth in both upper and lower jaws. The teeth in the lower jaws are more erect and narrow while the upper jaw’s teeth have slanted cusps and are triangular.

Grey reef sharks are found both in the Pacific and the Indian Oceans. They are found along the coastal area of India, South Africa, Madagascar, Maldives, the Red Sea, China, New Zealand, Australia, Indonesia, and the Philippines. They prefer shallow waters over the deep sea, thus coral reefs are their favorite place to be.

At maximum, the grey reef shark can achieve a length of 8.3 feet, however, on average, they only grow upto 6-7 feet. According to their length, the weight varies and the largest specimen might weigh around 74 pounds, while the average weight is around 44 to 66 pounds.

Grey reef sharks are carnivores just like other members of reef sharks. They primarily feed on fish including surgeonfish, butterflyfish, and cowfish. They also prey upon squid, octopus, lobsters, crabs, and shrimp. Usually, they follow the school of fish swimming freely in the ocean and corner them for consumption.

Like other members of the reef sharks, the grey reef shark is also a viviparous specie that follows internal fertilization and gives birth to young ones.  When a female decides to mate, it releases certain pheromones to cue the male counterpart. The male counterpart then holds the female with his teeth for mating.

The claspers on the male’s body are used for the transferring of sperm into the cloaca of the female during mating, which then fertilizes the egg. The yolk sac placenta in the females is used for the nourishment of the embryos, until the completion of the gestation period which lasts for a year. As a result, 1-6 pups are born.

On average, the grey reef shark can live for 25 years. But some species also lived for 28 years.

Grey reef shark, according to the IUCN’s red list, is Endangered. In the Maldives, the depletion of the grey reef shark has been observed and it is expected that a notable decrease can be observed in other areas as well.

The known predators of the grey reef shark, killer whales, and silvertip sharks contribute to the decrease in their population. Human activities including finning and overfishing are also a threat to the number of grey reef sharks.

Due to the developmental activities around the coastal areas, the coral reef habitat of grey reef sharks has been affected, which ultimately is causing them to either migrate or put a strain on their survival.

Grey reef sharks belong to the family Carcharhinidae and have a grey body, white-tipped dorsal fins, and black-tipped pectoral fins and enjoy feeding on fish. They are not aggressive species thus people enjoy taking a swim with them. But ocean pollution and developmental activities are causing a serious decline in their number.