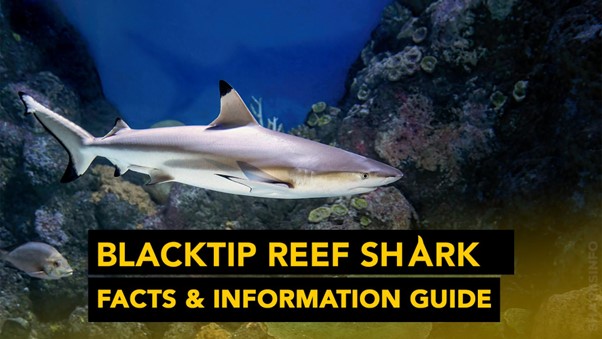 They have narrow teeth among which the upper teeth are erect and serrated while the lower teeth have finely serrated edges. A total of 23-28 teeth and 21-27 teeth are found in the upper and lower jaw, respectively.

As the name suggests, these sharks live in shallow reef waters and are commonly found alongside the coastal areas of Japan, Thailand, Northern Australia, South Africa, and New Caledonia. They do not go deeper than 20 m in the waters and prefer warm waters over colder ones.

Being a carnivore, blacktip reef sharks consume fish, mollusks, cephalopods, and crustaceans. They attack the school of fish including sardines, surgeonfish, herring, mullet, menhaden, and anchovies. Some reports also claim that they feed on seabirds and sea snakes.

Unlike most sharks, blacktip reef sharks reproduce via the Viviparous mode of reproduction, in which the young ones develop inside their bodies. After delivering the pups, the females put them in the nurseries in the shallow water, where those pups do not face threats from predators. The mating season of blacktip reef sharks is between November and March. The female keeps the young one inside herself for almost a year, before giving birth.

The average lifespan of the blacktip reef shark is 10- 13 years.

The threats and dangers posed to the Blacktip reef shark have been causing a decline in its number, thus, the IUCN has placed it on the red list as a Vulnerable species.

Being a small reef shark, the blacktip reef shark does become prey to some of the larger marine animals including a grey reef shark, groupers, tiger sharks, and even some larger members of their own species who also attack them.

Human activities like overfishing are causing a serious decline in the population of the blacktip reef shark, as they are often captured for commercial purposes for their tasty meat, fins, and liver oil.

The habitat destruction is also taking a toll on the juvenile population of the blacktip reef sharks, as the juveniles need a nurturing environment for their survival in a safe space.

The blacktip reef sharks have blacktips around their pectoral and dorsal fins, are found swimming in shallow waters, and feed on schools of fish. They are not aggressive predators, nor do they attack humans unless provoked. However, human activities are causing a decline in their population, which need to be taken care of.