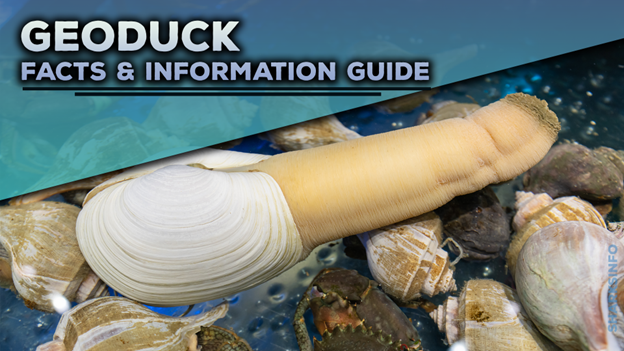 The largest species of clam in the world, Geoducks are a type of clam that is native to the west coast of North America. These species are often called Pacific Northwest treasures, and although they may seem odd, they are magnificent creatures that have some surprising traits to offer. Despite being the unique species on the planet, little has been known to people about the geoduck. To make sure you are not one of them, the article brings you geoduck facts and an information guide. So, let’s continue to read with us as we explore the species in detail.

Geoducks are among the strangest-looking mollusks to grace American cuisine, earning a reputation for being one of the most delicious. While it may seem related to a duck (see its name), Geoduck is actually a large clam – in fact, the world’s largest burrowing clam.

Distinguished by their short shells and long siphons, geoducks have a unique appearance. Their necks split open into two parts, each serving a different purpose. The one takes in life-giving nutrients like oxygen and phytoplankton. Whereas the other part is used to discard excess water.

It is unlikely that the shell will grow bigger than 8 inches, but the soft body may reach over one meter in length. It is estimated that they weigh just under two pounds on average, but they can grow up to seven pounds. A large part of Geoducks’ growth occurs in their initial years, and they stop growing at around fifteen years of age.

Where do geoducks live?

Pacific Northwest is the habitat for Geoducks. They live in saltwater environments, such as estuaries and tidal flats.

This clam burrows its way into the seabed, so you won’t see it cruising through the sea; instead, you’ll find it on the seabed. Muddy or sandy sediments are ideal habitats for this type of clam, as they can burrow into them easily.

What do geoducks eat?

Geoducks are filter feeders, which means they eat by straining small organisms and organic matter from the water around them. Geoducks typically feed on diatoms, algae, and other microscopic plants and animals. They can also consume larger prey items like shrimp, crabs, and fish. In captivity, geoducks should be fed a diet of marine-based pellets or flakes supplemented with live foods like brine shrimp or bloodworms. It is imperative to give a selection of foods to geoducks to make certain they are receiving all the nutrients they need.

How long do geoducks live?

Although geoducks grow slowly, their lifespan makes sense because they live a long time. The longest-living geoduck recorded lived to be 168 years old, but most geoducks’ lifespan revolves to be around 140 years old.

How do geoducks reproduce?

Geoducks reproduce by releasing their eggs and sperm into the open water, where insemination takes place. The larvae that result from fertilization settle into the sediment on the seafloor and eventually grow into adult geoducks.

There is currently no evidence that geoducks are endangered, but their inhabitants are said to be deteriorating because of habitat loss and overfishing.

Despite this risk, geoducks remain a popular food item worldwide.

Geoduck is an amazing creature that is both delicious and unique in appearance. It is a giant clam that is native to the west coast of North America and is prized for its large size and its sweet, succulent flesh. Filtering water and removing pollutants from the water column are among the many functions that geoducks play in marine ecosystems.