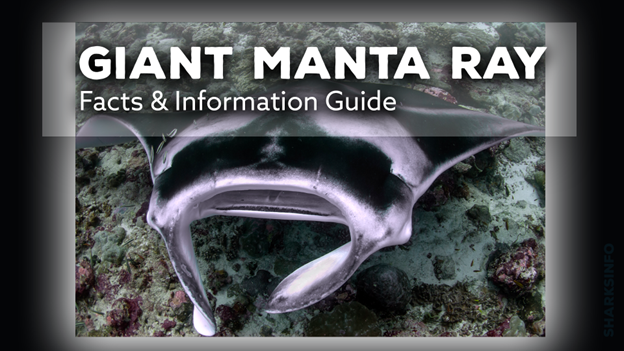 A giant manta ray is one of the world’s largest rays and, at the same time, among the world’s largest fish in the marine world. They are gentle giants that are often curious about humans, and they are a joy to watch as they gracefully swim through the water and feed on plankton and small fish. Because we are accustomed to seeing or learning about sharks and whales of enormous size, seeing and learning about a gigantic ray will surely captivate you. Let’s get started!

Out of hundreds of species known to exist, the giant manta ray has the largest wingspan with a span of 29 feet. To walk you through the information guide, let’s first go through the scientific taxonomy and then will proceed to appearance and physical characteristics.

With their large, diamond-shaped bodies and elongated pectoral fins that resemble wings, manta rays are easily recognized. The manta ray comes in two distinct color forms: black on the back and white on the belly, or almost black on both sides. Additionally, their bellies have distinctive spot patterns that can be used to identify them. Probably the most distinctive physical characteristic of the giant manta ray is its wing-like pectoral fins.

Typically, giant manta ray pups measure between 3.7 and 4.7 feet wide when they are born. Their wingspan can measure over 30 inches when they reach adulthood, and their weight can reach 3000 pounds.

Throughout the world, manta birostris is found in tropical and warm temperate regions. Their typical habitat includes offshore waters, oceanic waters, and coastlines with productive fishing. During the year, giant mantas may visit colder waters for short periods of time as part of their long migrations.

Planktonic organisms such as copepods and shrimp are primarily consumed by giant mantas, but some studies note that they also eat small fish. Known as cephalic lobes, giant mantas possess specialized flaps that allow them to swallow more water and food. Manta rays often aggregate in shallow waters a few meters deep when feeding.

All over their range, giant manta rays are caught both as targets and bycatch in fisheries. Overfishing has severely affected their overall population. In addition, vessel strikes, climate change, and harvesting for commercial purposes have led the species to be graded as endangered.