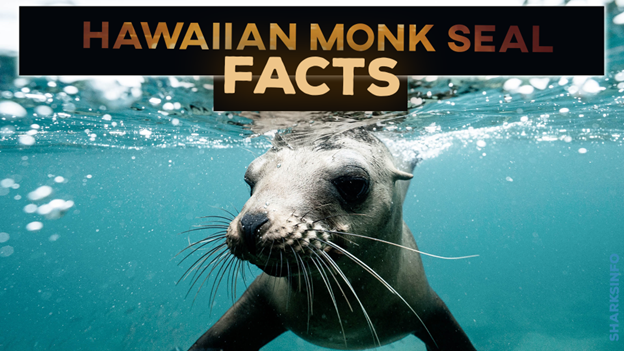 The Hawaiian monk seal, which was once found in abundance, now faces extinction threats and has been officially declared the most endangered seal worldwide. Well, the lack of knowledge might be the reason people aren’t concerned about it.

Every animal on this planet serves a purpose, and their extinction would cause irreversible damage to the ecosystem. The Hawaiian monk seal is no different. This article is going to talk about Hawaiian monk seal facts, habitat, diet, conservation, and more. So, continue to read along with us as we explore the species in detail.

Everything you need to know about the Hawaiian Monk Seal

A native to the Hawaiian Islands, the Hawaiian monk is an endangered species of earless seal. The name refers to the fact that it lacks external ears and is unable to rotate its hind flippers under its body.

It’s interesting to note that Hawaiian monk seal pups are born black, but as they turn to adults, they tend to have a gray stomach and dark gray back. There are eight pairs of teeth in this species, and it has a small flat head with large black eyes. Molting occurs approximately once a year when the outermost layer of the animal is shed.

Their unique natural markings, such as scarring and bleaching marks on their fur, make Hawaiian monk seals easy to identify. As a result of its slender body and torpedo-shaped hind flippers, the animal is one of the best swimmers in the animal kingdom.

The length of the crown to the tail of these marine mammals ranges from two to four meters. Whereas females may grow a bit more in size than male species.

There are some Hawaiian monk seals that weigh as much as 600 pounds as adults, but they typically weigh 400 to 500 pounds.

Around the Northwest Hawaiian Islands are where you can find the majority of Hawaiian monk seals. Often spending the majority of their time at sea, they are happiest in warm waters. Pupping generally takes place in shallow waters enclosed by sandy, protected beaches.

The Hawaiian monk seal is carnivorous and forages on a range of prey. Typically, they feed on various kinds of fish, but they will also hunt for squids and crustaceans.

Hawaiian monk seal life expectancy, on average, is about 25-30 years. There are only a few who reaches over 30 years old.

Male Hawaiian monk seals mate with multiple females in a polygynous sexual arrangement. By the time females are 5 or 6 years old, they are typically mature enough to reproduce. A pup is born on a beach after a gestation period of approximately 9 to 11 months. The pups are nursed for about six weeks after they are born.

At this time, the current population stands at just around 1200 in numbers, which is, as can be seen, significantly low. It clarifies why the species is classified as Endangered.

In order to survive, the Hawaiian monk seal population is threatened by a variety of factors that mainly include shark predation, climate change, habitat loss, food limitation, and above all, human activities involving fisheries and intentional killing.