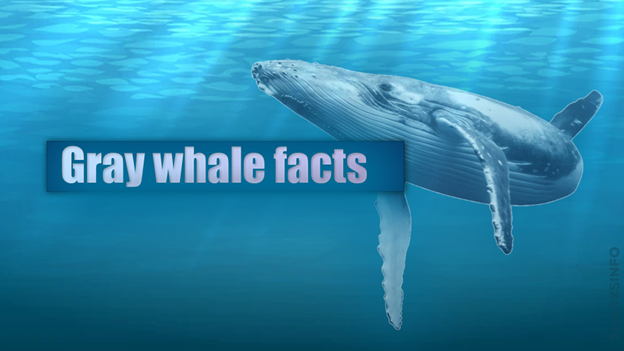 The whale’s popular name derives from the grey and white flecking on its dark skin. Gray whales were historically referred to as “devil fish” due to their combative nature during hunting.

Compared to other baleen whales, this whale has proportionally smaller heads, short baleen, and no dorsal fin. From the middle of the back to the tail flukes, they feature 9–13 bumps or “knuckles” in place of a dorsal fin. Of course, they are a greyish color. There are two to four neck grooves on them.

Female: Like other baleen whale species, mature females tend to be a little bigger than adult males.

The size of newborn calves is about 4.9m. The size also varies with gender. For instance, the size of the male is 13m and the female is 14.1 m.

In the northern parts of their range, grey whales mainly eat swarming mysids, tube-dwelling amphipods, and polychaete tube worms, but they are also known to occasionally eat red crabs, baitfish, and other food items like crab larvae, mobile amphipods, herring eggs and larvae, cephalopods, and megalops when they are not on the main feeding grounds.

13.5 months; December to February is the birthing season and November to December is the mating season; calves typically give birth every two years.

Gray whales reach sexual maturity between the ages of 6 and 12, on average between 8 and 9.

In the warmer lagoons of Baja, California, grey whales mate and give birth to their young. Migration paths follow the North American shoreline from the Bering Sea’s cooler waters to Baja, California’s balmy lagoons.

Because they are predominantly bottom feeders, gray whales can only feed in the shallow continental shelf waters. Although they do forage farther from the shore on the shallow shelf of the Chukchi and Bering seas, they are mostly coastal in nature.

The Conservation Status Of Gray Whales is Least Concern as suggested by IUCN through recent studies.

These whales are famous for their hunting nature. They are decreasing in number due to water pollution. Humans should stop hunting fish as it is putting whales as endangered animals. Humans should protect and care for all animals. Keep the atmosphere, land and oceans clean.