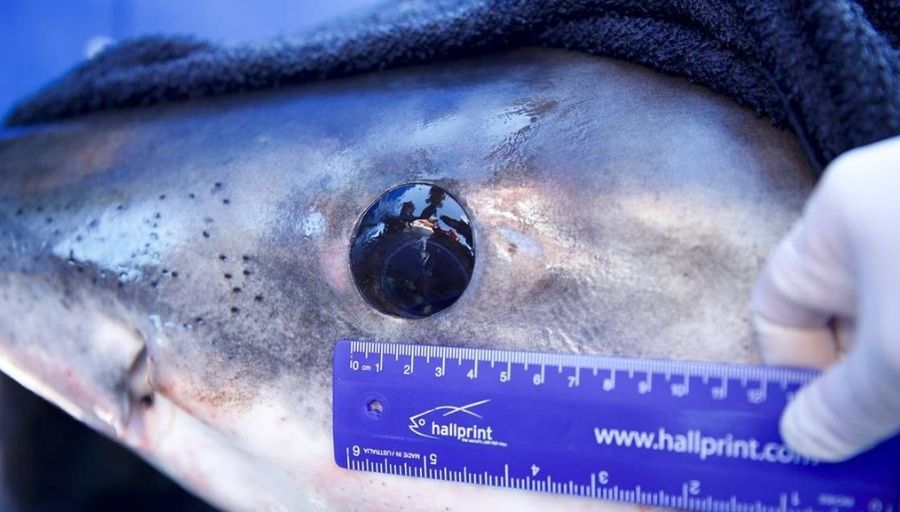 As the apex predators, great white sharks strike fear into our hearts. On the other hand, they are absolutely fascinating due to their unique characteristics, traits, and attributes. In addition to their big mouth containing razor-sharp teeth, the great white shark’s eyes alone are frightening enough but also captivating that you lose yourself in them. This article is a good read before diving into the ocean to see great white shark eyes since getting near the apex predators is not a safe option unless you are cage diving.

Sharks are marine creatures dwelling in the world’s oceans for millions of years. It is through their acute senses that they have survived mass extinctions event and their ability to adapt to different environmental conditions.

Since their existence, sharks have been diversified into over 500 species, and the great white shark is among the species of sharks that are considered as apex predators. Being on the top of the food chain, great white sharks have an integral role to play when it comes to balancing the marine population and keeping the ecosystem up and running.

The tendency of great white sharks to smell blood is well established, but what about their sight? Well, it’s no less impressive. Whether it is about feeding or hunting, the eyes have a crucial role for the giant beasts.

How do the great white shark eyes work?

As mysterious as it seems, a great white shark’s gaze is not so mysterious, after all. Its eyes, although black and lifeless at first glance, are intricately colored and complex. Looking at their eyes, you may get an idea if they are about to attack.

Talking about the eye’s functionality, it works almost the same as of humans and contains similar elements like the retina, cornea, lens, iris, and pupil. It was earlier believed that sharks cannot see color, but the identification of rods and cones in shark eyes has reverted the claim. Photoreceptor cells such as rods and cones allow sharks to make sense of light and darkness and to see in dim conditions, respectively. There is evidence that they can see in color, but it is unknown to what extent.

Besides this, sharks have an additional feature that facilitates good vision in dark or murky waters. Known as Tapetum lucidum, this layer of mirror crystals lies just behind the retinas. Can sharks see is out of the question now as we have seen that they have really good eyesight.

Having said that, the great white shark has a few blind spots as well, and that is because the eyes are opposite to each other on the sides of the head. As a result, they have blind spots in front of their snouts and behind their heads. Nevertheless, this doesn’t affect much when targeting the prey.

There is a mechanism through which sharks protect their eyes. There are two ways to do that, depending on the species of shark. One is that they have a nictitating membrane behind eyelids that cover the shark’s eyes when they are too close to attack or when feeding. The species of sharks that don’t have eyelids roll back their eyes for protection.

The great white shark falls into the second category. So it’s a yes; they roll back their eyes.

Because great whites lack a nictitating membrane, they roll their eyes back into their heads to shield them. The term ‘ocular rotation’ refers to the fact that the creature is essentially blind in the moments before it attacks. Nonetheless, great white sharks have other vital senses, including lateral line and electroreception, that help them locate and target their prey like no other species.

The protective system of shark eyes shows how important the sighting is for sharks and, more importantly, for apex predators.

It fascinates how every part of a shark’s body serves a different purpose and how they are such fascinating creatures of the ocean. As the largest predatory shark, as well as the most dangerous, learning about the great white shark’s eyes is an exciting experience in itself. Because of lack of knowledge, they were believed to be blind, but as we have read, they are capable of locating their prey even from a distance because of their excellent sense of sight.