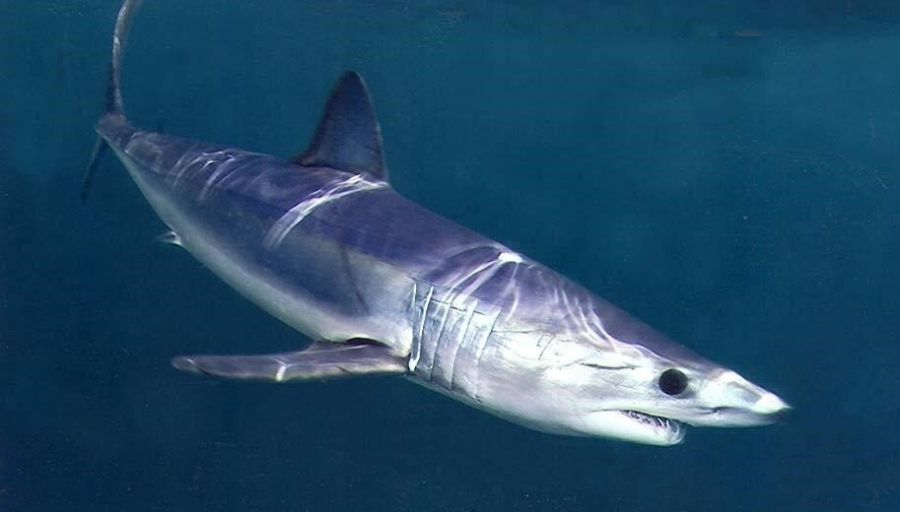 The Longfin Mako Shark’s name comes from its especially long pectoral fins. These fins are often just as long as (or even longer than) its head. Similar to its sister species — the Shortfin Mako Shark — the Longfin is most commonly set apart by its huge eyes and long, knife-edged teeth.

The Longfin Mako Shark (Isurus paucus) is a species of mackerel shark (Lamnidae family) that appears in temperate and tropical waters around the world. The Longfin Mako is a relatively rare species that shares a name with its relative shark — the Shortfin Mako (I. Oxyrinchus).

With its maximum length of 4.3m (14ft), its slim physique for a shark, as well as its longer and wider pectoral fins, we can discern that the Longfin Mako is a slower and less active swimmer than its relative. Being a pelagic species —residing in moderate oceanic depths — this shark can be found in somewhat deep waters and has been recorded at a depth of 220m (720 ft). Like most other sharks, the Longfin Mako is also a predator, its prey being small, bony fish and cephalopods (members of the molluscan class).

It is uncertain whether this shark is able to raise its body temperature above that of the surrounding water. It has endothermic countercurrents (vascular heat exchangers) in its muscles, eyes, brain and intestines, like other sharks, so it should be able to raise its temperature in theory. However, the extent of its control under ambient conditions has not yet been measured.

The Longfin Mako Shark is the larger of the two Mako sharks. It is also one of the largest species in its family (second to the Great White Shark), and they usually reach 2.5 m long and weigh up to 70 kg. Despite being so heavy, they are slender sharks with long and pointed snouts. Their large eyes have a lack of a nictitating membrane, which is a protective membrane that most sharks have. The largest recorded Longfin Mako Shark was a 4.3-meter female caught in February 1984 off the coast of Pompano Beach, Florida.

The Longfin Mako Shark is one of the five members of the family Lamnidae, made up of the Short Fin Mako, the great white shark, the porbeagle, and the salmon shark. Like other mackerel sharks, it has a crescent-shaped tail with a pronounced keel and retinal physiology. The size and appearance of the Longfin Mako Shark is similar to that of its sister species, the Short Fin Mako, but it grows longer (up to 4 meters) and slimmer with a more extended and wider pectoral fin.

The shark’s teeth are large with razor-shaped edges and secondary cuspids (canines for sharks). The outermost teeth of the lower jaw stick out of the mouth. Twelve to thirteen rows of teeth exist on both sides of the maxilla (jawbone). The pectoral fin is long, with a straight front edge and broad tip.

The first dorsal fin has a large rounded crown and is located just below the pectoral muscles. The gills are slit so long that they reach to the top of the head.

In this species, reproduction is aplacental (viviparous), which means that embryos from eggs hatch in the uterus. In a later stage of development, the unborn cubs feed on non-viable eggs from the mother (oophagy). Litter sizes fall anywhere between two and eight pups.

This Mako inhabits the upper Mesopelagic regions (200m-1000m) during the day and the Epipelagic (50m – 100m) at night. They are most abundant in the waters of the Western Atlantic and Gulf Streams in northern Cuba. They are also found in southeast Florida, the Central Pacific, the Phoenix Islands, and northern Hawaii.

It is thought to migrate throughout its tropical oceanic range, although specific movement patterns have yet to be identified. When inhabiting the open ocean, they live at a depth of 110 to 220 meters below the epipelagic-mesopelagic boundary, although they have also been observed at depths below 90 meters.

The International Union for the Conservation of Nature (IUCN) classifies Longfin Mako Sharks as critically endangered due to their rarity and low reproduction rates. The fact that they’re hunted doesn’t help either. Since 2019, the IUCN has listed the Longfin Mako Shark and the Shortfin Mako Shark as critically endangered. Its commercial value is limited as its meat and fins are of lower quality than other pelagic sharks and it is caught in small quantities throughout its range.

They are most often hunted in Cuban longline fisheries off the north coast of Cuba and in the Japanese tropical pelagic longline and then offered for sale in Tokyo. Its flesh is used as fresh, frozen, or dried salt for human consumption. In addition, some longline species are caught with hooks and anchored gillnets.

So, is the longfin mako shark endangered? Low fertility, late sexual maturity, low frequency, and increasing pressure from fisheries in the oceans have placed this species under special protection. Currently, it is listed as vulnerable on the IUCN Red List of Threatened Species (Appendix I), Appendix I of UNCLOS (CMS) and the Memorandum of Understanding on Migratory Sharks (Appendix II, CMS).

Despite all this, few conservation measures have been taken for the Longfin Mako Shark. The species is caught in the tropical pelagic longline fishery alongside tuna, swordfish, and sharks in anchored gill nets, hooklines, and other oceanic fisheries in its range. The meat is considered of inferior quality and of little commercial value, although the fins are valuable and have a price, and specimens caught without fins and their carcasses are disposed of at sea.

The diet of the Longfin Mako Shark is known to include a variety of teleosts, bony fish, and cephalopods. They also feed on pelagic cuttlefish and school fish. The main prey of this species is fish and squid. However, they will also eat tuna,bonito, mackerel, swordfish, and other fish species. While it’s less likely, they will sometimes feast on ocean birds, smaller sharks, turtles, and small porpoises.

Because they’re very fast and aggressive predators, they have an advanced metabolism and must feed at a near constant rate. In order to survive and remain healthy, they must eat at least 3% of their total body weight per day. For a Mako weighing 150 lbs, that’s roughly 4.5 lbs of fish.