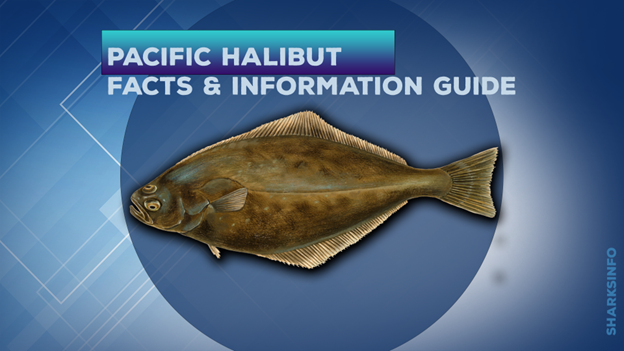 A Pacific halibut is one species among the thousands of fishes you see in the oceans that take your breath away, not because of their size or something else but due to their unique flat appearance. Flat, diamond shape body structure, it is always a mesmerizing experience to see one. Also, wow-worthy is the fact that it is one of the largest flatfish in the ocean.

Interested in learning more about this species?? Get along with us as we will discuss Pacific Halibut facts and information to guide American oceans.

Everything you need to know about Pacific Halibut

There is several species of flatfish, but the Pacific halibut is one of the largest, with an approximate size of up to 8 feet and weighing around 500 pounds. Male species, however, are slightly smaller in size as compared to females. Also called the Alaskan Halibut, in scientific terms, the species is referred to as Hippoglossus stenolepis. Let’s get down with scientific specs first.

The body of halibut is wide and diamond-shaped, making it a flatfish. Typically, these fish have a mottled gray or dark brown upper side, which helps them blend into sandy or muddy habitats. It is usually white on their undersides. Among flatfish, it stands out because of its crescent-shaped tail. On both sides of their bodies, their eyes are located on the upper side. There are tiny scales on these fish, giving them a smooth, sleek appearance.

Water temperatures between 38°F and 46°F are ideal for halibut in the Pacific. A large number of them are found in the central Gulf of Alaska. The species, though they inhabit the seafloor, tend to gather around the continental shelf since they enjoy shallower waters where they can hide in mud or sand and find plenty of food.

Seafloor organisms and crustaceans are eaten by juveniles. Whereas the adult Pacific Halibut consumes a variety of fish and invertebrates. The main course of the diet includes octopus, sculpins, Pollock, crabs, shrimp, and clams.

Biologically speaking, males reach adulthood at the age of 8, and females reach maturation at the age of 12. A large population of them hatch along the continental incline during the winter.

There is a record of a 55-year-old halibut being the oldest on record. The age of halibut beyond 25 is rare, however.

Pacific Halibut faces a number of threats, including from humans. The species is highly valued both as a commercial and recreational fishery resource. Aside from that, it is a favorite target for sports fishermen. With all these, H. stenolepis is also a nutritional and spiritual source of sustenance for Western Indian tribes and Alaskan natives. As a result, they are caught in large numbers.

In the North Pacific Ocean, Pacific halibut is among the largest flatfish species. Regardless of whether they are caught commercially or for sport, their large size and delectable meat make them popular targets. However, despite threats, it is sustainably managed and does not face extinction threats.