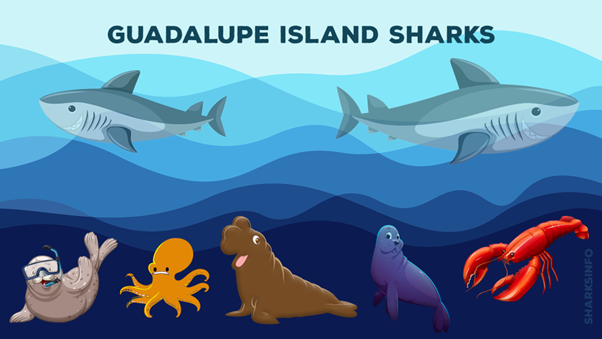 What Is The Guadalupe Island?

Guadalupe Island is a rocky volcanic Island that is extended about 165 miles or 265 km in the South West of the Ensenada – the upper region of Baja California, Mexico and 177 miles or 285 km towards the South West of San Diego. It can take about 15 to 20 hours to reach the island. The Island is occupied by only 200 people especially fishermen, farmers, and Navy personnel.

Which Living Creatures Are Found On The Guadalupe Island?

First and foremost, Guadalupe Island is the hometown of one of the most fascinating creatures of the ocean- the sharks. About 170 different species of Great White sharks live on this Island. Other than that, fur seals and northern elephant seals, sea lions, octopuses, and lobsters have also been spotted on the Island.

Why Is Guadalupe Island A Home To Many Sharks?

More than 300 species of sharks live on Guadalupe Island. This is because the coastal region of the Island is abundant with fur seals and northern elephant seals, sea lions, octopuses, and lobsters which attract the great number of shark species that gather on Guadalupe Island every year.

How To Cage Dive In Guadalupe Island?

Well, there is no specific diving site on Guadalupe Island but Cage diving is the only way out to encounter sharks. After accessing the underwater conditions and under the supervision of the experts, the cages are lowered in the water, especially in the areas where sharks are larger in number and you will have the chance to see them in the crystal clear water of Guadalupe Island.

What Is The Appropriate Time To Dive In The Guadalupe Island?

Usually, a month from July to November is highly preferable to dive in with the sharks. During this season, the ocean looks very calm and peaceful, the temperature ranges from 66 to 72o F which is suitable for the sharks or other creatures living under the water. The Great White sharks are great in number in July and August. Sharks especially female sharks are sighted during October and November. Sea lions and Fur seals are spotted in the month of August and September, and sometime in  October as well.

Guadalupe Island is home to Great White sharks, fur seals, sea lions, and northern elephant seals. About 170 different White shark species have been spotted under the water. Other than that, 300 different species of shark often visit the island especially when the water parameters and weather conditions are suitable for them. The only way to interact with this remarkable creature is by cage diving under the supervision of a highly trained team.