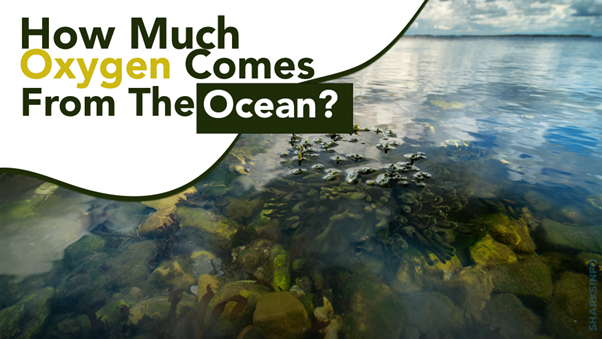 As we all know that water covers about 70 % of the Earth, and is home to many marine and aquatic species. This means that oceans produce a relative amount of oxygen, providing it to organisms living under the water for breathing purposes. Let’s see how much oxygen is produced by the ocean. Scroll down!

How Much Oxygen Comes From The Ocean?

According to an estimate, half of the total amount of oxygen on the Earth comes from the ocean. Scientists believed that on average 50 to 80% of the oxygen comes from oceans. However, the exact percentage is not the same all the time because the amount of oxygen changes every time due to various environmental factors.

How Do Oceans Produce Oxygen?

A large amount of oxygen is produced by photosynthetic plankton which covers the surface layer of the ocean. Other than that, drifting plants, and microscopic organisms like algae and bacteria can also contribute to the production of oxygen under the water.

How Much Oxygen Is Produce By Phytoplankton?

Phytoplankton is the primary producer of the food chain, which contributes to 5% of the total photosynthetic activity on the planet. Phytoplankton plays a major role in the carbon cycle, as it consumes atmospheric carbon dioxide for photosynthesis and releases oxygen as a by-product which is used for respiration by living organisms under the water or on land.

What Factors Affect The Oxygen Level In Oceans?

The significant level of oxygen varies by various factors such as:

Yes! Oceans need protection as it provides surviving habitat for several species. The oceans can be protected by decreasing pollution and chemical waste which will be helpful to preserve the phytoplankton as well as other marine life. Preventing the overharvesting of marine species and encouraging the companies which serve to protect nature, is the best way to protect the oceanic world.

Water covers about 70 % of the water, which means that oceans provide a survival habitat to aquatic as well as marine species. Recent studies reported that around half of the oxygen on the Earth is produced by ocean water. Phytoplankton and other photosynthesizing organisms contribute majorly to the production of excess amount of oxygen, which we breathe.