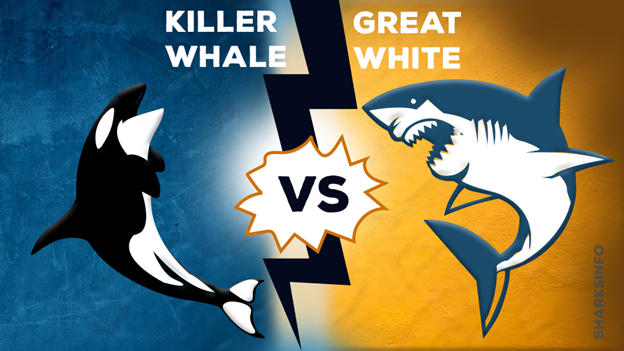 The greatest predators of the ocean, the Orcas and Great White sharks, have battled for centuries – there can be no greater fear than watching them go head-to-head. A comparison between the two giants of the ocean and their ultimate battle is nothing short of thrilling.

Dominating the ocean world for centuries, among the shark species, the great white shark is the most famous and all due to their aggressiveness, strength, and power.

Having a reputation as bloodthirsty giant monsters, if there is any other creature that can fight with the great whites is the Orcas, also known as the killer whales. Considering this, it’s natural to wonder if the great whites are the apex predators or the killer whales. Who is going to be at the top in this battle of the predators? Crazy enough to find, we have provided comparisons of the best for you to decide.

Both animal species are the top predators of the ocean, but among themselves, who will win is what we all want to know. While it may be hard to give a name, we can surely compare the characteristics of both, and it will give you an idea of who might be the ultimate ruler of the ocean. So, here is a quick contrast.

Who Would Win; A Great White Shark Or An Orca Killer Whale?

From the comparisons, it seems like we have the winner already. How true is that? Let’s do a bit of elaboration.

Apex predators are in a battle here, but the outcome is rather one-sided. Despite its fearsome reputation, the great white shark is outclassed by the orca, and it would crush it in a straight fight. Healthy orcas have greater strength, bravery, and strategic ability than their great white counterparts. In a contest, a healthy orca always wins.

When it comes to the ocean’s greatest predator, orca versus great white shark usually remains the hot topic for discussion. It’s likely that the huge, man-eating great white shark will be cited as the world’s biggest ocean predator. But in reality, as we’ve seen, Orca killer whales have many advantages over great white sharks, whether it is in terms of size, speed, or hunting techniques. So, in a battle of predators, we have Orca Killer whales as the ultimate winner.