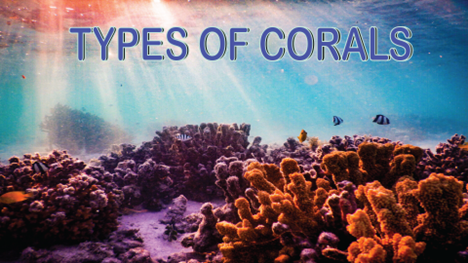 The corals seem nothing less than crown jewels of the natural marine world, but the reality contradicts what the eyes meet. Corals are neither plants nor are they hard rock; instead, they are the colonies of the most fascinating marine animals. With their vibrant colors, enthralling textures, and shapes, one could easily recognize them as they are the most bewitching animals in the marine world.

Corals belong to the Phylum Cnidaria of Kingdom Animalia and have been diversified into more than 6000 species. All these species of corals play their roles in maintaining the natural ocean ecosystem. If you want to be a better steward of the ocean world, then stick to this article, as this is going to introduce you to a number of fascinating coral species that can easily mesmerize your mind.

Although there is a huge number of coral species and it is barely possible to give a brief description of all 6000 species, this article is going to elucidate the coolest and out-of-this-world kinds of corals dwelling in the deep as well as shallow water of the ocean. According to some specific external features and habitat, the corals are divided into 3 major groups.

As the name refers, hard corals are comprised of a hard exoskeleton that is comprised of a special type of Calcium Carbonate known as Aragonite. They are a major part of the ocean’s coral reef surviving in a symbiotic relationship with an alga specie known as zooxanthellae. Apart from helping in the survival race, Zooxanthellae are also the reason for the enchanting colors of the corals.

After attaching themselves to any solid rock or even seabed, corals start dividing vigorously, resulting in the formation of the proper colony, which has a calcareous exoskeleton chiefly comprised of Aragonite. Let’s know the names of some engrossing hard coral species.

Unlike hard corals, soft corals do not have a hard exoskeleton made up of calcium carbonate; rather, they are quite flexible and can move as well as a bend with continuous sea currents. They have minute elements of sclerites that give them support and strength. They have a very fast growth rate that substantially increases their population.

Their structural proteins help them stabilize their cores. They are not dependent on Zooxanthellae, just like hard corals, but they keep these species in their tissue media. Soft corals also have a variety of species that are enough to captivate the human mind. Let’s jump onto its different types.

The deep-sea corals are the most recent discovery of corals as their habitat is almost 20,000 feet below the surface of the ocean, but they are one of the oldest organisms existing in the ocean. They are neither exposed to any sort of sunlight nor do they survive on any type of symbiotic relationship.

The only survival aspect that does not let these organisms get extinct is by capturing the microscopic organisms. So, let’s learn about the deep-sea species of corals that are ruling the depths of the ocean.

With the striking colors that directly influence the human mind, the eye-captivating textures and shapes with a large scale of diversity among the species, the corals are one of the most fascinating marine animals that simply enhance the beauty of the ocean to hundred and even thousandfolds. Whether it’s hard coral, soft coral, or even deep-sea coral, they have their own uniqueness that marvels the human mind and insists on them being a better steward of the ocean.