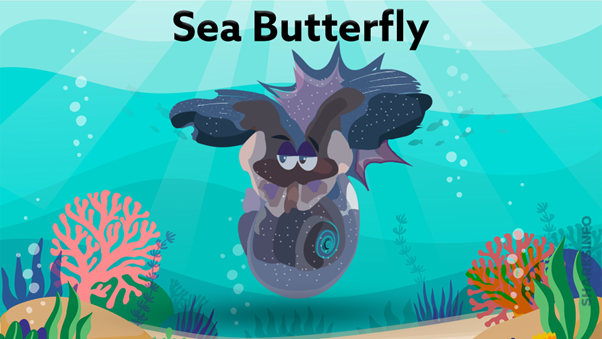 You must have seen beautiful and vivid colored butterflies in your life, mostly in your garden. But have you ever seen a butterfly swimming in the ocean waters? Of course not!

In the extended oceans, far away from the coastal regions at the depth of 1,600 feet or 500 meters, there lives a small beautiful creature named Sea Butterfly. Just like snails, the Sea Butterfly carries a shell made of aragonite which makes them highly vulnerable. They look exactly like a snail but instead of dragging themselves onto the floor of the ocean, the Sea Butterfly use their wings and take a long tour throughout the ocean waters.

In this article, we are bringing these remarkable creatures into the limelight so that you would learn more about them. Keep reading.

How Sea Butterfly Do Are Scientifically Classified?

What Is The Habitat Of Sea Butterfly?

The Sea Butterfly are found roaming in most of the oceans of the world. They usually live deep in the oceans and are rarely seen near the shoreline.The pelagic species are mostly spotted in the open waters of British Columbia, California, the Western coast of America, the Sargasso Sea, the North Pacific Ocean, the Beaufort Sea, and the Gulf of Alaska. Sea Butterfly prefers warm waters of the tropical region but few specimens have also been reported in the cold waters of the Arctic and North Atlantic Ocean.

What Is The Physical Appearance Of Sea Butterfly?

The body of a Sea Butterfly is completely transparent and looks strangely like a jellyfish. The Sea Butterfly are very tiny creatures that can grow to a maximum size of 1 cm to 2.5 cm in length. On both sides of their body, they have small lobe-like appendages which act as a wing about 8 cm long and allow them to fly in the extended ocean. These minute creatures have a snail-like shell made up of aragonite which protects them from harsh environmental conditions.

What Feeding Habitat Do Sea Butterflies Adapt to?

Well, there is very little known about these remarkable creatures of the oceans. The studies conducted on the feeding habitat of Sea Butterfly explain that they are passive feeders that include plankton flowing along the water current in their diet.

How Do Sea Butterfly Hunt Their Prey?

As a tiny creature, the Sea Butterfly adapts unique hunting strategies to hunt its prey. Sea Butterfly creates a mucus web just like a net to catch the flowing planktonic food.The size of the net is about 5 cm long bigger than that of their body. Once they trap enough food, then they throw the net away and create a new web for the next feeding cycle.

How is Sea Butterfly Important To Food Chain?

The Sea Butterfly plays a fundamental role in keeping the ecosystem healthy by providing food to other animals living in the same habitat. A wide variety of fish feeds on Sea butterflies which in turn are eaten up by large animals such as polar bears, dolphins, or sharks – keeping the food chain in equilibrium. However, some sea birds and whales feed directly on the Sea Butterfly.

How Does Acidification Of The Ocean Affect Sea Butterfly?

Sea Butterfly carries a small shell made up of aragonite which is highly susceptible to climate change, the acidity of water, and pH. Due to human activities, atmospheric carbon dioxide continuously increases, which is absorbed by the ocean and causes the acidification of water. As the acidity of water increases, it directly hit the shell of the Sea Butterfly and gets dissolved and deposit in the sediments affecting the other life of the ocean.

What Threats Do Sea Butterfly Faces In Their Natural Environment?

Under the water, the population of Sea Butterfly is greatly affected by the threats posed by predatory animals. Being extremely small in size, the Sea Butterfly is an easy target to catch. Giant creatures such as Whales and Fish being filter feeders consume them, and other marine animals injure or kill them while roaming on the floor without even noticing their existence. If Sea Butterfly visits the shoreline, then the sea birds watch them out and grab them in a second.

Sea Butterfly is small creatures that have evolved with time and developed small lobe-like wings that help them to swim under the water. Just like a snail, they bear shells made up of aragonite which provides protection and have transparent jellyfish-like bodies – both these features make them different from the other aquatic animals. Although, they play a key role in keeping the food chain in balance by providing food to other animals due to changing environment and threats of predatory animals; the population of Sea Butterfly is declining which may lead to the extinction of these creatures from the oceans.