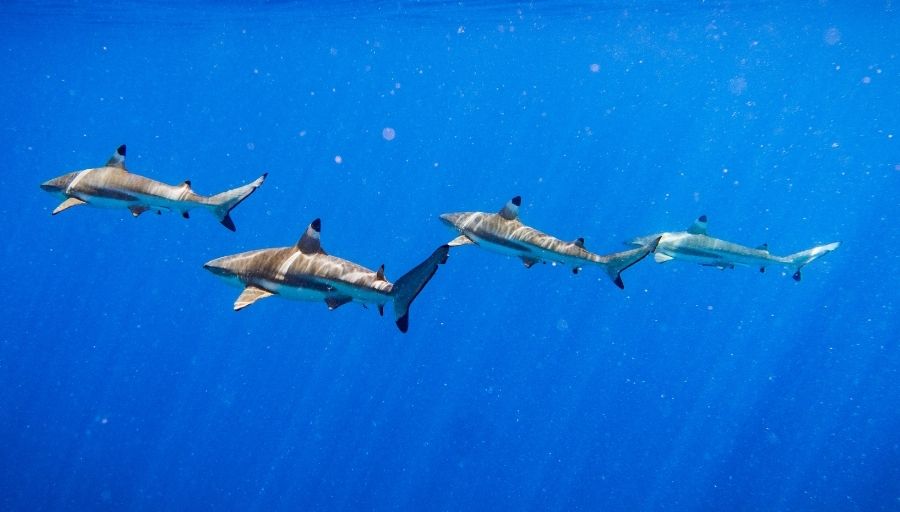 From the days you started hearing the viral craze baby shark song produced by the Pinkfong to watching movies like “Jaws,” the perception of a shark set in our mind is the same which is of a giant beast with razor-sharp serrated teeth capable of tearing apart anything and everything that comes across.

Talking in particular about the behavior, it is thought that they will attack the moment they see any person. Well, it doesn’t seem to be true as we have seen people diving and swimming along with sharks. But before you jump into the water, it is suggested that we take a closer look into the behavior of sharks, and in particular, towards humans.

Sharks are astonishing creatures of the oceans living here for millions of years. Till now, scientists have discovered over 500 species of sharks, and it is believed that there are many more in the deep oceans waiting to be revealed. As amazing as they are, a plethora of misconceptions have been set in our minds, such as about shark behavior.

From their birth to this day, sharks have been dominating the world’s oceans as top predators, and they hardly have any competitors except the Killer whales, which confront on rare occasions. Other than that, sharks are the ones ruling the waters. This particular fact alone makes people think about how dangerous and threatening sharks can be.

However, as said earlier that there are over 500 species of sharks to be found, and each one is different in all aspects, whether you talk about their behavior, size, shapes, or colors. They all have different attributes, traits, and qualities.

Though it is correct that sharks are dangerous beasts and are large in size, it’s not like that with all species. Not all sharks are aggressive, and not all are big in size. There are species as small as they can fit in your palm.

You may find it surprising to know that there are species of sharks that are kept as pets, and they prove to be a good addition to the family.

Nevertheless, sharks are fascinating creatures, and if you like to get close to them, it’s always a good idea to learn about their behavior.

More importantly, you may know that sharks are killed in large numbers each year, and it is mainly because of misunderstanding the sharks. Sharks, as top predators, play a vital role in maintaining healthy blue oceans. Thus they are important to us all, and their extinction is not something the world is ready for.

For all these reasons, you need to have a closer look at the behavior of sharks, as this will help you understand the species in the best way.

The behavior of sharks has remained the least concern for us all, whereas it is the most important thing if you are looking to learn about the species.

Talking about it, there are two aspects you need to look into. Sharks’ behavior of how they live, eat and behave with other creatures, and secondly, how’s their behavior toward humans.

First, we are looking into how they live in their natural habitat, and later we are going to discuss their behavior with humans.

The history of sharks goes back millions of years. They are cartilaginous fish of the elasmobranch family. More than 500 species of sharks have been discovered throughout the world, differing in size, shape, color, and behavior, but they all live in different parts of oceans.

Sharks are generally solitary creatures; they hunt and swim alone most of the time, but they may meet with other sharks during mating periods or in densely populated areas.

There are some species that form social structures based on their types. However, sharks, in general, don’t need to protect themselves from predators since they are apex predators.

The majority of sharks are carnivores, and most eat fish and marine mammals such as dolphins and seals. Based on individual species, they may also consume other marine creatures such as sea lions, turtles, crustaceans, and also other sharks. There are, however, species such as whale, basking, and megamouth sharks which are referred to as filter feeder sharks and feed mainly on plankton.

When there is poor visibility in the water, sharks use their lateral lines to detect water movements to find prey and navigate around objects. Check out what a lateral line is and how it works.

For sharks to receive oxygen, water must constantly move over their gills; however, some sharks do not need to move at all times. Such species of sharks have other breathing systems like spiracles which helps them to stop at any moment for the time being. Learn more about how sharks breathe.

Since sharks are solitary hunters, they mainly confront other creatures only when they intend to attack and eat. Sharks are powerful creatures, and they easily get over their competitors, except, as mentioned earlier, the Killer whales. A large prey, however, may be hunted in groups by some species. Individual sharks may have different hunting techniques used by them to target their prey.

So, when it comes to eating, sharks will come to attack; otherwise, they will be swimming around like other creatures in the aquatic environment.

It is believed that sharks will attack and eat humans anytime they see a man roaming around in their territory. However, this is not exactly true. Different species of sharks react differently when they detect human presence in the waters.

The great white shark, for example, is a declared dangerous species that exhibits aggressiveness towards humans and is also responsible for most attacks on humans. On the other hand, there are species such as nurse sharks or whale sharks that make their name on the list of nicest sharks.

So, it all comes down to the specific species.

With that said, most shark attacks occur due to human provocation. As a general rule, if you don’t intrude on them, they will not come your way. In addition to the behavior, knowing about sharks’ whereabouts and habitat is also important.

The experience of watching sharks up close is always mesmerizing for anyone; however, you can enjoy it a lot more if you know about their behavior. In this way, you’ll have an understanding of how they will react to your presence and how close you can get to them without being attacked.

Surely having a closer look into shark behavior will help you understand the species in a better way, and you will be more responsible towards them as well.