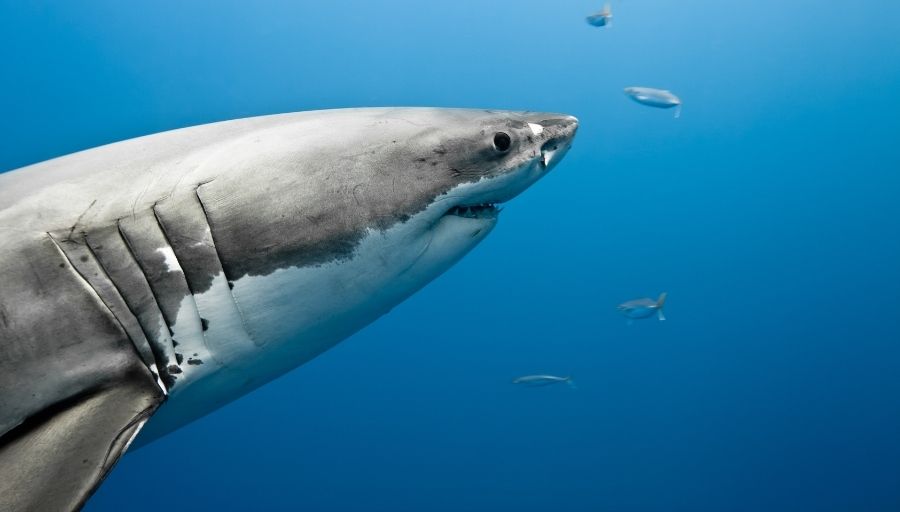 Sharks are characterized as one of the largest groups of fishes belonging to the class Chondrichthyes – blessed with the remarkable cartilaginous skeleton. There are more than 500 species of sharks living in the ocean water for more than 300 million years ago. Sharks differ from each other based on their physical appearance, size, shape, and habitat. In this article, we are going to share with you some of the interesting facts related to the 9 most famous and iconic species of sharks.

Basking sharks are known to be the second largest species of sharks living on Earth. They are named so because the species are mostly spotted near the shoreline and it looks like they are basking in the sun while swimming. The maximum length of sharks is 40 feet, weigh more than 7 tons, and favour plankton in their menu. According to the reported data, due to overfishing, 80% of the population of basking sharks has declined in the past 60 years.

The Bull sharks are mostly found living in the warm and shallow waters of the Atlantic coast, Central America, Australia, Africa, and India. They have huge and bulky bodies that can grow to an average length of 11.5 feet and weigh more than 500 pounds. They are the most aggressive type of sharks not only towards humans but also towards the other creatures of the oceans and sometimes also get angry with their member sharks.

These sharks are found living in tropical warm waters. They are freshwater species of sharks but are spotted wandering in the saltwater as well. The length of these sharks varies from 13 to 16 feet or 3.9 to 4.8 meters. These shark species are extremely aggressive toward humans and multiple cases of shark attacks have also been reported.

The Whale sharks are the largest species of sharks living in the oceans and the biggest species of fishes living on the planet. They live in the warm waters of the  Indian, Atlantic, and Pacific Oceans. The sharks can grow to a maximum length of 65 feet and weigh more than 75, 000 pounds, a mouth of a Whale shark is about 1.5 meters wide with 4,000 small and pointed teeth arranged in 350 rows. Whale sharks have a life expectancy of 100 to 150 years on average.

The Nurse sharks are found swimming in the open warm waters of the Eastern Pacific Ocean and Western Atlantic Ocean. They are named the Couch potato of the shark’s realm because the species are always spotted resting on the floor of the ocean but hunt actively at night hours. The average length of these sharks is 4.3 meters and have an average weight of 150 kg. As they are bottom dwellers, they extract oxygen from the flowing water by buccal pumping. According to an estimate, these sharks have a lifespan of 25 years.

The Hammerhead sharks are known to be solitary hunters which hunt actively at night while in daylight they travel and hunt in schools (a group of 10 to 12 sharks). The species can have a maximum length of 20 feet or 0.3 to 6 meters and can weigh 600 pounds or 170 kg. The sharks came in limelight because of their odd-looking hammerhead. They include octopuses, stingrays, crabs, squids, shrimps, lobsters, krill, and barnacles in their diet menu.

The Oceanic White-tip sharks are the slow movers but the most aggressive hunters living in the ocean waters. They are named so because the species are dark Gray with white tip dorsal fins. The species are spotted in tropical warm waters at the depth of 100 to 500 feet or 30 to 150 meters. The sharks can grow to an average length of 3 feet but some species can reach the length of 6 feet as well.

The Shortfin Mako sharks are known to be the fastest species in the shark’s kingdom, they can swim with a speed of 32 kph (kilometre per hour) or 20 mph (mile per hour). The Mako sharks are found living in the tropical as well as the temperate regions of the Mediterranean Seas, Indian, Atlantic, and Pacific Oceans. They have a maximum length of 13 feet and weigh more than 1,220 pounds. The Mako sharks are highly migratory species that can travel long distances through the extended oceans.

More than 500 species of sharks have been living in the oceans for a long time, they have undergone several evolutionary changes which help them to adapt and survive in their changing environment. In this article out of 500 species, we have explained the 9 most famous and popular sharks. We hope that after reading the article you have learned something new about the splendid creatures of the oceanic world.