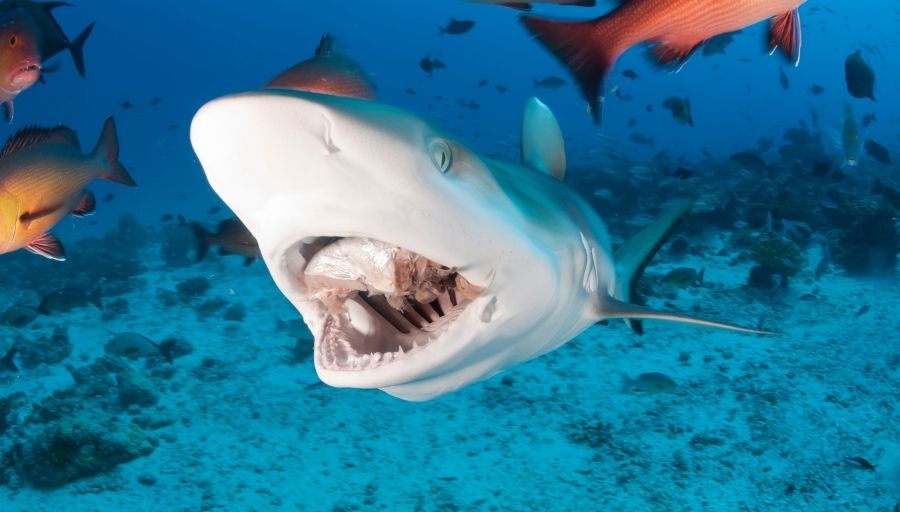 There are three known methods of shark feeding. The first feeding method is known as filter feeding. Filters inside shark mouths allowing only plankton and tiny fish through. The second method of feeding is by tearing and is used for bigger pray. The last method of shark feeding is swallowing a prey as whole.

Filter feeding is the method used by Whale Sharks, Basking Sharks and Megamouths. They feed mainly on plankton and, although they all make use of filters, their methods differ. Whale Sharks suck plankton and small fish in, Basking Sharks swim through large groups of plankton with their mouths gaping (allowing plankton to enter in naturally) and Megamouths have luminescent tissue inside their mouths, which works well to attract prey.

Feeding by tearing is the most graphic method used by sharks. An interesting fact is that sharks usually only bite humans once. Once they tear your limb of or take a small bite out of you, they stop because they dislike the taste of human flesh. Underneath a video of a great white shark tearing a dolphin apart.

Sharks are notoriously carnivorous hunters and are known to tear their prey apart. There are a small number of species that do not feed on fish and similar prey but, for the most part, this reputation holds true. Fish, squid and crustaceans are generally the most freely available, but sharks will include seals, other sharks and even the odd human being in their diet, depending on availability.

Some sharks swallow their prey whole but that depens on the size of the shark and their prey. Sharks that tear their prey don’t chew. They swallow the their bites without chewing. The same happens when a shark swallows a prey as whole.

The Diet Of Sharks

In general, however, a certain shark species will stick to a specific diet with little deviation from that particular prey. There are exceptions to the rule as is the case with Tiger Sharks, which are known to feed on almost anything. This behaviour then changes to a rapid crisscrossing until a rapid and violent attack is made. When sharks hunt in packs, their excitement frequently builds to such an extent that a feeding frenzy occurs. This chaotic attack results in the death of many fellow sharks.

Sharks kept in captivity may refuse to eat, displaying their ability to go for extended periods of time with no food. Similarly, males that are in a courtship period and females that are on nursery grounds may not feed for some time.

Sharks have a particularly short intestine. Food is first stored in the J-shaped stomach. If any unwanted prey or items entered the shark’s mouth during an attack, it is discovered in the stomach and vomited out before entering the intestines.