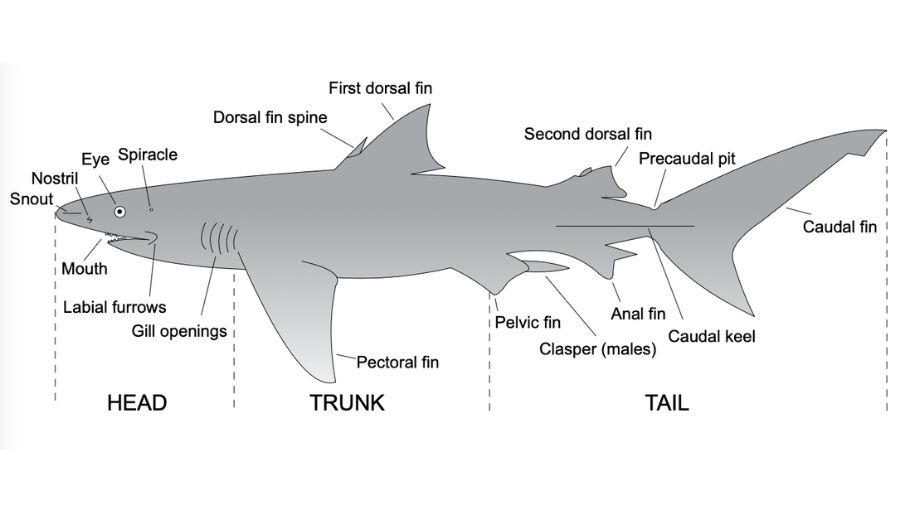 According to an estimate, there are more than 500 species of sharks living in the ocean water, but they all have the same anatomical features. The distinctive anatomy of sharks sets them apart from other aquatic and marine creatures such as dolphins and whales. However, sharks come in a variety of shapes, sizes, and colours which sometimes make it problematic to distinguish them from the other species of the open waters.

By understanding the anatomy of sharks, you will have a glimpse of the evolutionary changes and adaptations which made sharks the apex predatory creature of the oceanic world. Sharks are blessed with many extraordinary features which need an explanation. So, let’s go through the article to explore more about the anatomical structures of sharks.

The Anatomy of the Shark

The anatomy of sharks is highly developed for 450 million years which makes them the top hunters of the marine and aquatic ecosystems. Here is an overview of some exceptional anatomical features of sharks that makes them one of the most successful species on the planet.

All shark varies in the shape of their bodies; however, all sharks have aerodynamic bodies – round with tapering ends on both front and backside. The aerodynamic bodies allow sharks to swim efficiently and with extremely high speed though out the ocean, to travel long distances without wasting excess energy and it also reduces the friction produced by fast-flowing water.

The skin of sharks looks like sandpaper because it is covered with small rough and sturdy needle-like scales called dermal denticles. The denticles protect them from injuries and help them in swimming by reducing friction produced by fast-flowing water. The sharks are capable of shedding off their scales throughout their life and replacing them with the larger ones as they grow older.

The jaws of sharks are not attached to their head which is why they can move their jaws back and forth. The upper and lowers jaws function differently and provide a powerful force to tear up the prey in one shot. The jaws are equipped with multiple rows of sharp pointed teeth. The number and the shape of teeth depend upon the type of species. They are capable of shedding off their teeth with time and replacing them with new ones that’s why sharks probably have 30,000 to 35, 000 teeth throughout their life span.

The sharks have well-developed sensory organs which help them to locate their prey, find their mate, and sense any kind of danger near them. The amazing sensing ability of sharks makes them the apex hunter of the oceans and seas. Normally all living beings have 5 senses but interestingly sharks are blessed with 7 exceptional senses which are:

All species of sharks have a unique design tail which is one of the prominent features to distinguish between them. The purpose of the tail is to provide a shark with a burst of speed while swimming. Moreover, the tail keeps the sharks in equilibrium and provides flexible movements so that they can easily turn around and swims with agility.

Generally, sharks bear 5 pairs of gills and gills slits which help them in respiration by extracting oxygen from the flowing water. As the shark swims, it drags the flow of water over the gills which in turn absorb oxygen and transport it to the body organs, thus keeping the breathing mechanism in equilibrium and helping the sharks to breathe underwater.

1:  The body of sharks is called fusiform because they have a unique streamlined shape of the body having pointed and elongated ends from the front and back as well. Moreover, they are also able to camouflage with their environment to avoid the attacks of other predatory animals.

3:  Sharks have more than 30,000 teeth throughout their life but in general they have 300 teeth embedded in their jaws, out of which only 50 teeth work actively and efficiently at one time.

4:  The dorsal fins of sharks are coved with needle-like minute spines which provide a defense to them in hazardous situations.

5: Sharks have exceptional organs, the electroreceptor called Ampullae of Lorenzini detects the change in temperature as well as the electric fields produced by prey in a water current whereas the Lateral line helps sharks to detect the change in pressure.

6:  Generally, sharks have tails with longer upper lobes and smaller lower lobes. However, some species of sharks such as Angel fins have a unique pattern of the tail as they have a longer lower lobe and the smaller upper lobe – reverse heterocercal.

7:  Some species of sharks such as Six gills’ sharks have 6 to 7 pairs of gills that draw excess oxygen from the flowing water.

More than 500 species of sharks are living in the oceans, but all are anatomically similar to each other. Sharks have been thriving in the open waters for more than 450 million years, during the whole time due to climate changes, they undergo a variety of evolutionary changes – the streamlined bodies, tough and sturdy skin, powerful jaws, 8 exceptional pairs of fins, well developed sensory organs, unique designs of the tail and the remarkable capability of gills to draw oxygen from the flowing water – is enough to make them the top hunters of the oceans!