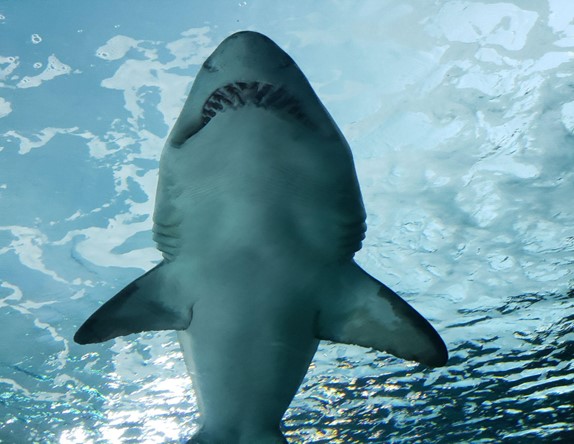 Sharks have undergone a wide range of adaptations that increases their chances of survival. Not only externally but also internally, sharks have evolved many adaptive features which makes them the top predatory animals of the oceans and seas. We are going to explain some of these distinctive anatomical features one by one to make you understand them clearly. Let’s begin the analysis!

1:  The cartilaginous skeleton of a shark

The skeleton of sharks is made up of cartilage impregnated with calcium salts which are durable, strong, flexible, and lighter in weight as compared to bones. The cartilaginous skeleton allows the sharks to move swiftly and quickly through the water waves, preventing them from sinking to the bottom of the ocean and also keeping the energy levels low that they need to move their bulky bodies. Moreover, the skeleton helps the sharks to take a rapid turn while traveling long distances, thus making them the agile creature of the oceanic world.

2:  The digestive system of sharks

It consists of the small and wide esophagus, a U – shaped stomach that opens up in a spiral valve (a lower part of the digestive tract) in a few species. The spiral valves are the coiled structure that increases the surface areas as well as the absorption of nutrients from the food. Further, the valves link to the rectum and cloaca (collective opening for digestive, reproductive, and urinary systems).

The U – shaped stomach

3:  The circulatory system of sharks

It contains a two-chambered heart with an S-shaped tube, the heart pumps blood towards the gills, and then it flows to the body tissues. The arteries carry oxygenated blood from the heart to the gills whereas the veins collect deoxygenated blood from the rest of the body and pass it to the heart for the next cycle.  The body temperature of sharks is quite higher than the surrounding waters which is due to the excessive heat produced by the red muscles (modified to produce heat). The body heat keeps the circulatory system warm which is why sharks have low blood pressure.

4:  The respiratory system of sharks

The sharks respire through gills just like lungs help land animals in breathing. The water enters the open mouth of the sharks, which passes through the pharynx and moves out from the gills slits. The gills slit extract excess amount of oxygen from the passing water and provide it to sharks for respiration. Most sharks such as Cow sharks and Frilled sharks have 5 pairs of gill slits whereas Six gills sharks have 6 to 7 pairs of gill slits.

Moreover, the sharks possess special cartilaginous respiratory openings located behind the eyes called spiracles. The spiracles are present on the top of the head which helps to extract oxygen from the water flowing over their gills.

It comprises two large lobes which store fatty acids and oils. The liver oil provides sharks with buoyant force and prevents them from sinking to the bottom. The liver covers about 90 % of the space in the body cavity and weighs up to 5 to 25 % of the total body weight.

Over time, sharks have undergone remarkable evolutionary changes which allow them to become the top predator of the food web. The cartilaginous skeleton, exceptional breathing mechanisms respiratory and circulatory system, and the remarkable ability of the liver to provide buoyancy are the key adaptive features that make sharks uphold their top position for a long time.