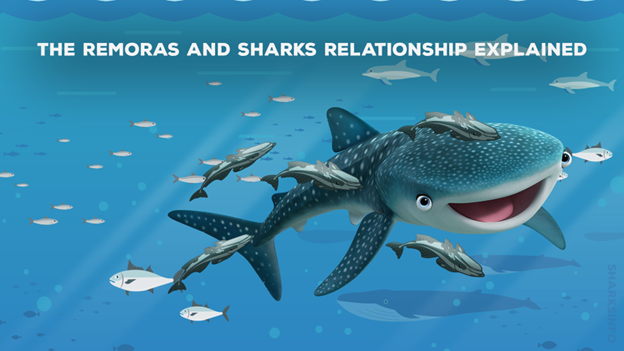 Swimming next to a relatively huge shark makes a fish’s life a lot easier. A group of fish is always found to be giving company to sharks on their trips. One of them is Remoras which are a small kind of fish that is found in tropical seas and is reckoned to have a curious symbiotic relationship or mutualistic arrangement with sharks.

Symbiosis is a type of relationship in which two partners from different species benefit each other in their wellbeings. Remoras rely on sharks for free transportation, protection from predators, and food resources. In return for these favors, these small sucker fishes provide cleaning services to their host by removing the irritating parasites from the skin and mouth of the shark so that it can live a less-annoyed life.

The Remora is a small kind of fish that evolved with the passage of time. During evolution, Remora adapted some new and unique features, including the evolution of suction cups on top of their heads.

The suction cup is a specialized organ that helps Remora to attach itself to the host body. The family of Remoras depends primarily on a plenty number of benefits a shark offers. Let’s dive deep into these benefits to increase our knowledge of this fascinating symbiotic relationship.

The Remora is a dweller of the open ocean that greatly increases the risk of being hunted by a reckless predator. The open ocean is not suitable for camouflaging and is failed to offer mysterious places to hide from predators. So Remora finds the shark as the best companion so that it can save itself from being preyed upon.

2: For the sake of meals

Another reason for hanging out with sharks is to get daily meals. Sharks are the messy predator, and while eating a marine specie, some scraps of their body are dropped easily by a shark which is then taken up by Remoras for their dinner party. The other source of food is the parasites present inside the mouth or on the surface of the skin.

3: Free transportation service by a shark

Apart from receiving a convenient food source, the shark also offers free transportation service to Remora. The sucker cups of remoras help them to attach themselves to the surface of the shark’s skin, and some are found to be attached to the belly of the shark. In this way, they are capable of saving a huge amount of energy they invest in swimming.

How does Remora benefit the Shark?

As it is a curious symbiotic relationship between sharks and remoras, the shark, after offering many benefits, receives a favor in return. Let’s see what this favor is and how it helps a shark live a peaceful life.

The Remoras are determined to eat the scraps dropped by the sharks. These scraps can contaminate the deep blue water of the ocean and result in a polluted environment. Moreover, remoras also clean the unwanted parasite from the shark’s body that can cause harm to the shark. It is also responsible for removing uneaten food from a shark’s mouth and losing flakes of skin, protecting a shark from some severe infections.

The remoras are relatively small fishes, and shark does not get bothered to attack these tiny species. Shark aims big and hunts bigger prey. According to some research studies, sharks are aware of the benefits that remoras offer them, which can be another reason for not attacking the remoras.

The most fascinating example of a symbiotic relationship is the relationship between sharks and remoras, in which they both receive benefits from the existence of each other. The remoras expect life sustenance along with protection and free transportation from the shark. In exchange for these favors, sharks are offered cleaning services that are important to maintain a healthier environment. That’s how the remoras and sharks benefit each other by ensuring mutualistic arrangement.