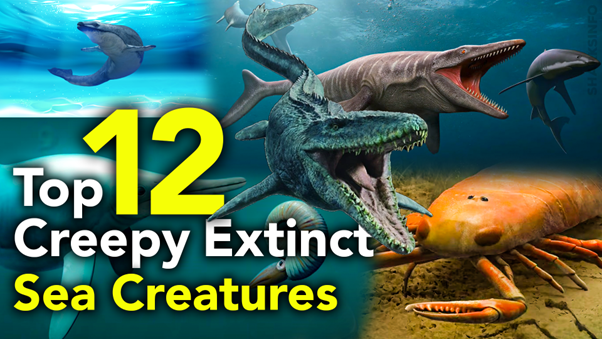 There are a lot of sea creatures that had been residing on your planet earth and have gone extinct over the centuries, but their fossils are still there to mark their presence. Some of those creatures were good to look at while others are simply creepy. Let us introduce you to the top 12 creepy sea creatures, that went extinct but had a huge impact on marine life.

Here are the sea creatures that were creepy both in terms of looks and behavior and went extinct with the passage of time.

Topping the list of creepy extinct sea creatures is the Tylosaurus. It was a giant marine reptile that resembles a lot of modern-day snakes and lizards. You can have a rough imagination of what it looked like and surely, and it was definitely not pretty to look at. A conical rostrum used to come off its snout, upon which its name has been given.

Tylosaurus has been recorded to be 45 feet long or more. The fossil evidence reveals that they were one of the top and most ferocious hunters of the ocean which were last seen some 65 million years ago.

Plesiosaurs were there in the oceans around 203 million years ago and dominated the ocean during that time period (the Jurassic period). They were reptiles who had very large bodies but small heads, which gave them a weird appearance, thus they have been placed on the list of creepy sea creatures. They had long and sharp teeth with 40 feet long bodies and four limbs which allowed them to move in the water.

The fossil record shows that, based on the speed, there were two kinds of Plesiosaur. The Pilosauromorph was a fast-moving one that used to catch high-speed prey, and the other, the Plesiosauromorph was the one with a slow pace and had an extremely long neck.

An extinct aquatic squamate reptile, the Mosasurus, was found living in the oceans some 82-66 million years ago. The fossils of Mosasaurus were first found in the 1700s, and since then, research has been dedicated to finding out that how did they go extinct. According to the data calculated from their fossils, it can be supposed that they were around 58 feet in length and were at the top of the food chain, and ate everything available.

Research shows that Mosausaurus evolved to move in the ocean using their paddle-like forelimbs, which helped them in hunting down their prey. They were truly one of the creepy marine animals that went extinct.

The giant monster and the biggest shark ever existed, the Megalodon, was surely one of the creepiest sea creatures that went extinct. During Miocene and Pliocene eras, it lived around 23- 3.6 million years ago and was known for its predatory nature. Though a complete fossil of this specie has not been discovered yet, its teeth are found in abundance which indicates that it might have preyed upon humans too.

Megalodon’s giant appearance and the idea attached to it that it went extinct still amuse a lot of people, thus it is commonly shown in movies and series.

Leedsichthyes problematicus, also known as Leeds fish, inhabited the oceans during the Jurassic era. It was one of the largest ray-finned fish and is also considered one of the largest fish this planet had ever seen. It became difficult for researchers to study in detail about this organism as the part of the skull of Leedsichthyes had been made up of cartilage, which fails to remain preserved over the years.

Leedsichthyes are believed to be 9 to 100 feet in length, but their average length has been set at 16 feet. These creepy sea animals definitely were one of the notorious predators in their times before going extinct.

Yes, frilled sharks are recently found swimming in the seas of Japan, but they surely went extinct, as per the fossil record. However, frilled sharks prefer to live in the deep depths of the ocean and they had been doing this for 80 million years or more. Thus, it is difficult to comprehend whether they went extinct or were just hiding in the depths.

They are called frilled sharks due to the presence of six gills which give a frill-like appearance around their neck. They look more like snake or eel and does not give any shark vibes. Their snake-like mouth has placed them on the list of creepy extinct sea creatures.

Kronosaurus is a short-necked Pilosaur that had been named after “Cronus” who was the king of old Greek. They had massive mouths in which one tooth sized up around 11 inches. They used their huge mouth to capture and swallow their prey without making much effort. There are many evolutionary theories associated with them one theory states that their flippers resemble the flippers of turtles, so it is possible that they went on the land to lay eggs or mate.

The reason for Kronosaurus’ extinction is not clear and a lot of research is still needed in this regard.

Ammonites were sea creatures that belonged to the phylum Mollusca. Their first appearance is recorded back to the Devonian period when they went extinct 66 million years ago. Their fossils showed that they had spiraled shells just like present-day Nautilus.

Interestingly, some of the ammonites used to be so big that they even reached the height of an average human. Their eye and huge size gave them a scary appearance, thus they are placed on the list of creepy extinct sea creatures.

The other name for the Basilosaurus is the King Lizard, however, they are not reptiles but predatory whales, though their appearance says otherwise. They were one of the most creepy sea creatures present in the late Eocene era (40-30 million years ago). The fossil record shows that it was commonly found in the Tethys Ocean and Pakistan, Morocco, Egypt, the US, and Jordan.

Basilosaurus was one of the top predators with 50-85 feet in length and sleek appearance, who fed on large bony fish, sharks, dolphins, and other marine mammals.

The Helicorpion was a ratfish that looked like a shark and went extinct around 20 million years ago. The fossils found of this organism are mostly of its “tooth whorls” which were made up of spirally arranged teeth in the lower jaw of Helicorpion. The tooth whorl found is almost 290 million years old, thus it is considered one of the top pre-historic creepy sea creatures.

As Helicorpion lacked teeth in their upper jaws, it is believed that they used to feed on soft-bodied organisms and used their tooth whorl to capture and tear the prey.

Ichthyosaurs are the largest marine reptiles that went extinct. They appeared around 250 million years back and it is to be believed that they went extinct around 90 million years ago. They are also called fish lizards due to their anatomical and physical features. The complete skull of Ichthyosaur was found in 1811, and after that, some other parts of its body have also been found, based on which it can be said that they reached a length of almost 98 feet.

Some 250 million years ago, the Eurypterid, a sea scorpion and the largest arthropod ever known lived in the oceans. The earliest specimen of this specie is thought to be living around 460 million years ago. Studies have claimed that they had a dual respiratory system which allowed them to survive both under water and on terrestrial land.

Despite being one of the top predators, the Eurypterid went extinct. Keeping in view their physical appearance, many people might be happy about their extinction as they looked creepy in every possible way.

Some of the creepy extinct sea creatures were Tylosaurus, Peliosaur, Mosasaurus, Ammonite, Frilled shark, Helicorpion, Megalodon, Kronosaurus, and Eurypterid. All these creatures were present in the oceans some million years ago but over time, due to climatic conditions, low frequency of reproduction, and predatory attacks, these creatures went extinct. Though they were not very pleasant to look at, they were still an important part of the marine food chain and life.