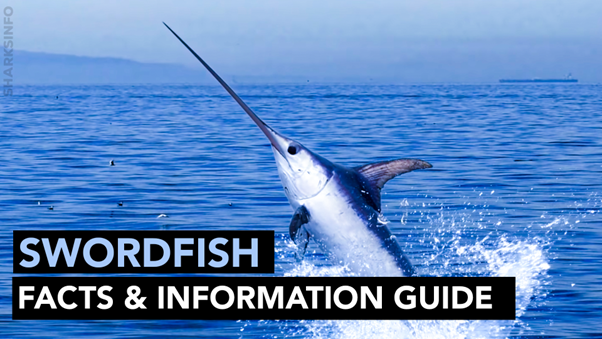 North Atlantic Swordfish or the broadbill,  is the most common specie which you can observe jumping out of the water with their long bills trying to target their prey. With its impressive size and appearance, the swordfish surely leaves a mark on everyone’s memory. Here is a detailed fact sheet about Swordfish which you can look at to learn more about the species.

Xiphias gladius, also known as Swordfish are fish with long and flat bills. The coloration of their body varies from black to deep brown on the upper side of the body while the lower side is usually white. Typically, they are silver or gray in color, overall.

Swordfish have rounded bodies with long and flat snouts and large eyes. Their dorsal fin resembles the shark’s tail and a feather. They lack teeth and pelvic fins. The pectoral fins are conspicuous in shape.

Their sleek and rounder bodies make them agile predators and great swimmers who can move at an average speed of 97km/h.

Swordfish are generally confused with marlins due to somewhat similar appearance, but both differ in terms of appearance, taste, teeth, size, weight, and lifespan.

Swordfish prefer to inhabit temperate or tropical waters around the world but do have the ability to survive cold waters as well. They are commonly found in the Pacific, Atlantic, and Indian Oceans having temperatures of 18-22 degrees Celsius. But even in cold weather in which the temperature drops to 5 degrees Celsius, swordfish can be found swimming in the waters.

Based on their habitat, they have been named the Atlantic Swordfish, the Pacific Swordfish, and the Mediterranean Swordfish.

Swordfish are known for their migratory behaviors as they migrate across the sea annually usually for feeding purposes.

Swordfish are considered one of the largest fish belonging to the billfish family. On average, they grow upto 7-15 feet in length and weigh around 450 kgs or more.

Swordfish are agile predators but are not picky about what to eat. At a young stage, they prefer to feed zooplankton but as an adult, they usually feed on rockfish, herring, mackerel, squid, octopus, large bony fish, Pacific Hake, Northern anchovies, and crustaceans.

Interestingly, Swordfish do not use their bills to tear the prey but they slash at their prey to stun them. A stun prey gets dismembered with a slash and the smaller pieces of that prey are then swallowed by Swordfish.

Swordfish are oviparous and the females are able to lay eggs of around 1,000,000 to 30,000,000 in one go. The Swordfish reproduce when the female releases its eggs in the water and the male releases its sperm to fertilize the egg, known as broadcast spawning, which results in the birth of juvenile swordfish. They get mature at an average age of 4-5 years and their females are considerably larger than the males.

The average lifespan of a Swordfish is observed to be 15 years.

The population of Swordfish is continuously decreasing and due to this alarming situation, the IUCN has placed it as Near Threatened on its red list.

The common threat to sea life including Swordfish is human activities which have been causing a severe decline in their number. Humans find it amusing and challenging to capture Swordfish due to their size, agility, and strength, which is a serious threat to their population.

Swordfish are also caught for commercial purposes as their meat is firm and white which is enjoyed by many people as a food, however, their meat contains high levels of mercury, which is toxic for humans.

To save the species of Swordfish the Atlantic Highly Migratory Species Management Division has been trying to manage the Swordfish’s capture limit.

The swordfish belong to the family Xiphidae, are highly migratory, and have round bodies with long and flat snouts which they use to stun their prey. They are pleasant to look at and their meat is flavorful as well, that’s why they are caught in large numbers to meet commercial needs. Conservatory measures are being considered to save the species from going extinct.