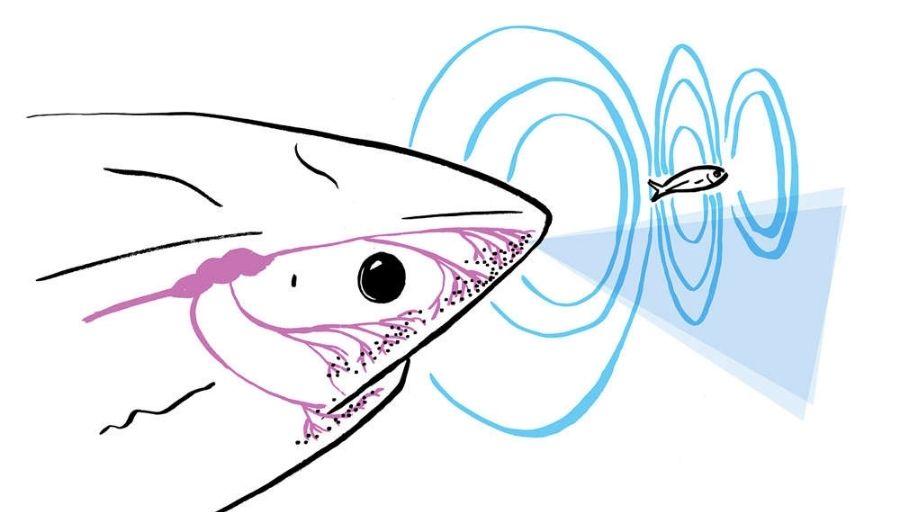 Sharks are the most incredibly keen predator of the marine world. The interesting thing about this finned predator is that its hunting skill is not facilitated by its sense of vision. The eyesight of the shark slightly touches the line of blindness, and a shark could confront crash and burn if it ever relies on its eye department.

Even though the sense of smell in sharks is remarkable and is able to sense human blood from a distance of almost 2.5 miles but it still cannot match its predating capabilities. So, how did a shark earn the title of the most extraordinary predator in the marine world?

From the evolutionary point of view, sharks have adapted some sensational features that outshine sharks in the list of marine creatures. For the shark’s fast and fierce predating capabilities, it has been equipped with the sixth sense known as electroreception. Although other members of class elasmobranch have adapted electroreception, the shark has some extraordinary and finely tuned electroreception skills.

How Do Sharks Use Electroreception?

Shark has been armed with electroreception. Just like electrocardiogram devices are used in hospitals to detect the electrical physiology of the human heart, a shark uses electroreception to detect its prey. Electroreception can be taken as the sixth sense of sharks which is very well-developed.

They can sense the electric current generated by any muscular activity of any animal or fish from a distance of almost 1600 Kilometers. The slightest change that occurs in the electric field, even if it is the one-billionth part of a volt, the shark has the ability to detect it. Sounds insane? Yes, with the help of the unbelievable attribute of electroreception, sharks are capable of sensing the one-billionth part of a volt and tracking their prey that is 1600 Kilometers away.

Your mind would be invaded by plenty of mysterious questions like how the heck in this world is this possible or how does a shark do this, or what is the thing that facilitates sharks to do this? For all these answers, stick to this article and scroll down.

It sounds quite unconventional, but it is the scientific name for special sensing organs that helps in electroreception. Sharks have highly developed minute pores that are invisible to the naked eye. These pores are present around the jaws and snouts of a shark and work as honing devices.

Depending upon the species, these pores can vary from 100 to even more than a thousand. If a shark is more sedentary, it could have about 100 pores. But if a shark is an active predator, the number of pores can exceed 1500.

These pores are occupied with a jelly-like matter that conducts electricity and is known as Ampullae de Lorenzini. The jelly-like substance present in the pores is composed of gelatinous secretions, which are stored in cylindrical canals that further connect the tiny sensory cells called cilia.

At the bottom of the ampullae, there are hundreds of hair-like projections called cilia. The jelly-like substance causes the electric current to reach the base of the ampullae. When it comes into contact with cilia, the cilia triggers the shark’s brain to release neurotransmitters. The neurotransmitters are special chemicals that release at the termination of the action potential. It then alerts the shark that a living organism which is going to be its prey, is looming nearby.

How Does Shark Electroreception Work In Hunting?

The electroreception skills of a shark can be its survival story. It helps a shark to seek out and find its kill. The living organisms that camouflage them behind the rock or the ones that cover themselves with the blanket of sand cannot be saved from being sharks’ prey. These animals cannot remain stationary no matter how hard they try to be.

The emissions of impulses are inevitable, and a shark can easily track them by using the sense of electroreception. With the strength of electroreception, sharks have become keen hunters, and eventually, they are dominating the marine world.

Along with the enhanced sense of smell, the shark has been armed with the strength of another sense called electroreception. Synergistically, both of these senses highly enhance the hunting abilities of a shark. From the evolutionary point of view, sharks hold supremacy in many aspects because of their electroreception skills. It is the Ampullae of Lorenzini and Electroreception that ensure a shark thrives in the most challenging conditions. Eventually, the shark emerges out to be the King of the Ocean.