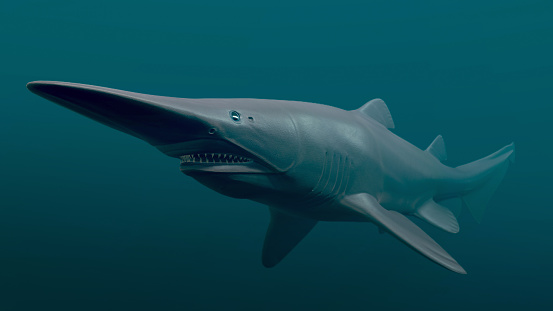 Have you ever heard about a species of sharks that always live deep in ocean waters? If not then we will introduce you to a deep sea species of shark – the Goblin shark. They are bottom dwellers and are hardly seen near the shoreline which is why there is not much known about them. But being a bottom feeder, the species feeds on a variety of food items. Read on to explore more about the feeding habitat of the Goblin sharks.

But before we go into a deep analysis of their feeding habitat, let us introduce Goblin sharks to you. So that you know who they are? Scroll down.

What Are Goblin Sharks?

Goblin sharks also known as “living fossils” is the only species of the Family Mitsukurinidae that are living in the ocean waters for about 125 million years ago. They are deep sea swimmers and are found roaming at the depth of 40 to 1,300 feet from sea level. They have pink skin with smooth and flabby bodies, flat but elongated snouts, extendable jaws, small eyes, and 5 pairs of gills slits. They can reach an approximate length of 9 feet to 20 feet and weigh about 330 to 460 pounds. Sharks are supposed to live for about 30 to 35 years.

What Do Goblin Sharks Eat?

As you know Goblin sharks are bottom dwellers, and the food is abundantly available near the floor of the ocean. The main course of their menu is described below:

1:  Bony Fishes:  Goblin sharks feeds on Bony fishes because they are a rich source of proteins, minerals, and vitamins.

2:   Crabs:  Crabs are rich in protein, omega-3 fatty acids, and vitamins that provide energy to sharks.

3:  Lobster:  It contains vitamin E, fatty acids, and essential nutrients and minerals that are necessary to maintain the health of sharks.

4:  Octopuses:  It is a rich source of essential minerals such as calcium, potassium, magnesium, and phosphorus, which provide about 20 % of the total amount of energy required every day.

5:  Squids: These provide sharks with a high amount of minerals and vitamins which keep the immune system healthy.

6:  Shrimps: Shrimps are rich in proteins, vitamins, and antioxidants that keep the sharks free from inflammation.

7:   Garbage: Other than healthy food, Goblin sharks also include garbage in their menus such as canes, trees, wood lodges, and many other components which make the aquatic environment polluted.

Are Humans Included In The Menu Of Goblin Sharks?

No! Goblin sharks do not pose any harm to humans because they are rarely spotted near the shoreline. Further, there is no single case of sharks attack on humans has been reported to date. But due to their large size, they might be potentially dangerous for humans. Be careful!

Goblin sharks always prefer to live near the ocean floor which is why there is not much known about such an incredible species of sharks. But as they are bottom dwellers and slow swimmers, the food is available in excess. They include shrimps, crabs, bony fishes, crustaceans, lobsters, small sharks, rattle fish, dragonfish, and cephalopods. Luckily, you are not included in their menu card because the sharks have rarely been seen near the coastline as they avoid human interaction.