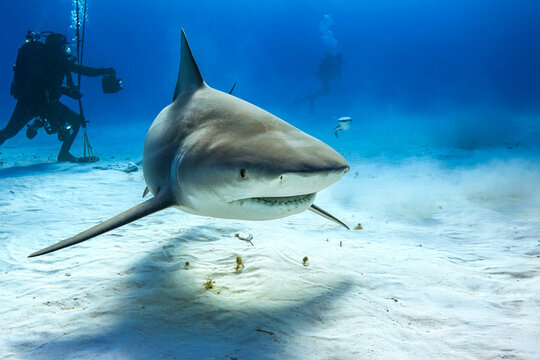 Look! The blackfin tip of the shark. Which shark is this? Is that a Bull shark?

Scientifically, they are named Carcharhinus leucas – the word “Carcharhinus” sharped nose species because most of the sharks included in this genus have blunt noses whereas the word “leucas” means white color which indicates the white colored belly of Bull sharks.

Read the article to learn everything you want to know about the incredible but most dangerous creatures of ocean waters.

Where In The World Bull Sharks Live?

Over the globe, Bull sharks are found living in the warm and shallow waters of the tropical coastline. Bull sharks are also found roaming in the freshwater habitat as well. The species are highly migratory and travel long distances to spend time in lakes and rivers. Approximately, they travel 3,701 km or 2,300 miles every year.

Geographically, Bull sharks thrive in the open waters of the Amazon River in South America, the Brisbane River in Australia, the Mississippi River in the United States, the Ganges River in India, the Tigris River in the Middle East, Lake Pontchartrain in Louisiana, Gulf of Mexico, Brazil, Baja California, and Ecuador.

Bull sharks have some features which distinguish them from other species of sharks. Bull sharks are small-sized bodies with long rounded and blunt snouts. They have large and angular pectoral fins, and broadly triangular and pointed dorsal fins on their back. The species have small rounded eyes which give them poor vision, unfortunately. Bull sharks have special glands and kidneys which allow them to live in saline waters.

What Is The Coloration Of Bull Sharks?

Bull sharks are dark grey from the upper side and are creamy to whitish from the underside of the belly. Interestingly, the fins of sharks are black from the tip but as they grow in size, the color continues to fade.

Like other sharks, the jaws of Bull sharks are movable and have triangular-shaped, broad, and serrated teeth in both upper and lower jaws. Normally, they have 5 to 15 rows of teeth embedded in the upper jaws and about 50 rows of teeth in the lower jaws – each row contains 5 to 7 teeth.

What Is The Size Of Bull Sharks?

According to the reports, the largest species of Bull sharks ever recorded can have a maximum length of 13 feet or 4.0 meters and weigh up to 694 pounds or 315 kg.

What Is The Life Span Of Bull Sharks?

The studies suggested that Bull sharks can live about 12 to 16 years in their natural habitat but when they are in captivity they can have a life expectancy of 25 to 30 years. Remarkably, the sharks can reach the maturity level at the age of 9 to 10 years.

The world’s most dangerous species of shark – The Bull shark came into the limelight because of their unique appearance. They have medium size body that can grow to a maximum length of 11 to 13 feet and weigh about 500 to 694 pounds. The large rounded snout, small-sized rounded eyes, large dorsal and pectoral fins with black colored from the tip, and the large serrated triangular-shaped razor-like sharped teeth make them look distinct from the other species of the aquatic or marine environment. After reading this article, we hope that whenever you come across a Bull shark you will spot them easily by their physical appearance.