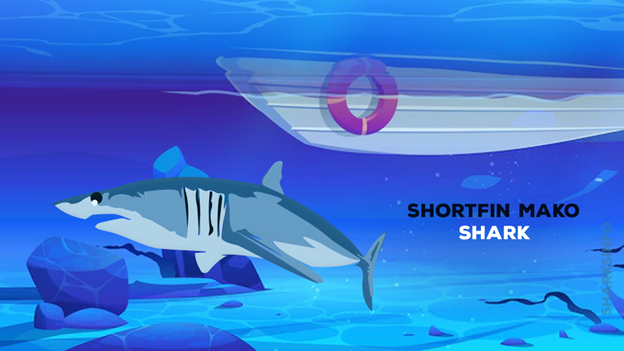 The most prominent creatures in the marine world are sharks, which are known for their giant size and many other unique traits. There are, however, sharks that, despite their large body size, can cross your eyes in a matter of seconds with their amazingly fast swimming ability. When underwater, the swimming speed of the apex predator is something, you should be aware of. Whenever we think of speed, we first think of trying to determine which shark is the fastest.

There are as many as 500 shark species inhabiting the ocean world, and they all possess amazing characteristics. There is no doubt that knowing which shark has the fastest speed will make you love and admire them even more. So, without any further talks, let’s get to know the name.

Which shark is the fastest in the world?

The shortfin Mako shark found in temperate waters is the world’s fastest swimming shark. This amazing animal can swim up to speeds of 60 miles per hour. That’s fast enough to outswim most other animals in the ocean. As one of the sea’s most feared predators, the mako shark is also highly regarded. Do not be anxious, these sharks have a preference to eat fish instead of people.

There are no sharks faster or more agile than a mako shark. They are known for their high-speed, acrobatic leaps out of the water. Sharks of this species can also swim backward, making them the rare species that can do so. In order to get oxygen and due to its ram-breathing requirement, the Mako Shark swims up to 36 miles every day.

Mako sharks are found in all the world’s oceans and are known for their high level of intelligence and aggressive nature.

They typically grow to be about 10-12 feet long but can reach lengths of over 20 feet. A female of the species is typically larger than a male because of its sexual dimorphism.

Makos are predators, and their food comprises mostly of fish, squid, cephalopods, and other sharks. By swimming below their prey, makos can see what is above and have a high likelihood of catching their prey before it notices them. When hunting, they pluck chunks of flanks and fins from their prey by lunging vertically up.

There have been several recorded attacks on humans by mako sharks. In most cases, the sharks have been provoked or startled by people. Otherwise, Mako sharks are highly intelligent species of sharks, and they do not tend to attack people unnecessarily.

With a swimming speed of 60 miles per hour, Mako sharks take the top spot in the list of fastest sharks in the world. Their speed, along with streamlined bodies, gives them an edge over other sharks and competitors in the marine world. When there is speed, the danger factor can also be present, so don’t provoke the Mako sharks, or it may turn into an aggressive encounter.