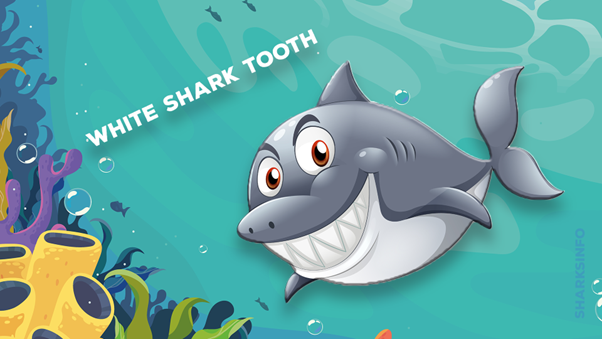 The Great White sharks, as we all know are the most fascinating creature of the ocean but when it comes to teeth, they have prominent and unique teeth that make them one of the most fearsome animals. The remarkable tooth structure of sharks makes them the apex predator of the oceanic world. These species have sharp razor-like teeth which allow them to feed on a variety of food items as well. Scroll down to learn some interesting facts about the teeth of White sharks.

How Many Teeth Do White Sharks Have?

Like all other sharks, the Great White shark can shed old teeth and replace them with new ones. They have coiled-like teeth which are stored in a backup that swings forward to fill the vacant space in the front row. Overall, Great White sharks can have 20,000 teeth throughout their lifetime. At one time, the White sharks have 300 functional teeth embedded in 5 rows in the jaws.

What Do The Teeth Of White Sharks Look Like?

As mentioned above White sharks have 300 teeth that are functional at one time. The teeth of White sharks are triangular and are serrated sharp just like a razor which allows them to tear up a large volume of flesh and make them extremely terrifying creatures. The teeth of sharks are embedded in soft cartilage rather than bone which allows the fall out of teeth easily.

Yes! The White sharks have extremely powerful bites that are enough to crush the prey into pieces at once. According to the studies conducted on the biting force, the White shark is capable of creating a bite force of 4,000 pounds per square inch (psi) or 18,216 N. This is because White sharks have strong movable jaws and a unique set of teeth which makes them the apex hunter of the sharks’ epoch.

How Do White Sharks Hunt Their Prey?

White sharks adopt a unique hunting strategy to kill their prey. They first grab the prey with the lower jaw and then with the upper jaw. Afterward, they forcefully shake the head to make the prey unconscious, then pierce the flesh into large chunks and swallow it.Interestingly, it is believed that White sharks can take up 30 pounds of meat in one single bite and consumes hundreds of pounds in one meal. They include sea lions, eels, turtles, sharks, dolphins, and seals in their menu card.

Yes! The teeth of White sharks are not only beneficial for the ecosystem but are also important for commercial purposes.Under the water, the shark’s teeth allow them to eat sick and weak fish to keep the ecosystem healthy. Commercially, the teeth of sharks are used as decoration pieces and to make pieces of jewelry which are quite valuable.