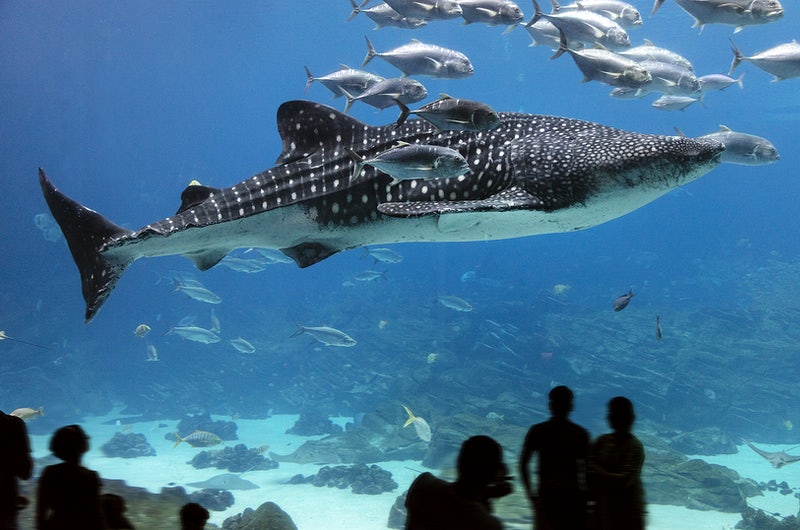 Despite being among the most dangerous predators in the world, sharks contribute to maintaining the balance of blue ocean populations. Their existence goes back millions of centuries; even older than trees.

These powerful creatures are found in both the Pacific and Atlantic Oceans. There are around 500 different species of shark that we know about. Every shark species is different from the other and varies in terms of size, coloration, characteristics, and behavior.

Though sharks are considered dangerous to humans, it is not the case with all shark types. Instead, some of them make great pets. When you compare the number of sharks killed a year versus how many people are attacked by sharks, you will see the sharks are greatly misreported. This brings us to talk about the 7 different types of sharks so that you understand marine life and how sharks are different from what they are portrayed.

In a world with more than 500 species, it may be difficult to know about every type, but learning about the seven will give you an advantage, and you will be able to distinguish between the seven types more easily.

Nevertheless, let’s move on to discussing the 7 different types of sharks.

Even though whale sharks are enormous, they are still one of the most fascinating and calm-nature fish in the ocean. They are 12 meters long and are the biggest fish in the sea. People often get scared due to their massive size, but they are very friendly, gentle, and completely safe to swim around.

Whale sharks have tiny, tooth-like scales on their skin known as dermal denticles; touching them can cause a cut on your skin, known as “shark burn,” and it can be excruciating as well as touching them disturb the protective layer present on their skin.

Grey nurse sharks, also known as sand tiger sharks, are between 1.2 and 2.7 meters in length with a lifespan of fifteen to forty years.

Grey sharks have the lowest reproduction rate among all the other sharks. They are known to be gentle and friendly with humans and can be found swimming alongside humans. But sadly, these vulnerable sharks are Australia’s most critically endangered species. Only 1500 are thought to remain within the East Coast population.

It is known as the 2nd largest fish after the whale shark. Basking sharks have massive jaws of approximately three feet with hundreds of teeth that could literally swallow an entire human. Despite their enormous jaws and giant size, they are totally harmless to humans, just like whale sharks or grey sharks. Basking sharks are filter-feeders, feeding primarily on zooplankton.

Hammerhead sharks are known for their unique hammer-shaped head, which helps them for various purposes, including hunting and granting the sharks 360-degree vision. These sharks love the warmth and prefer to be in warm coastal waters and can be found on coastal areas and the edges of continental plates.

Hammerhead sharks are opportunistic feeders and heavily serrated and triangular teeth, and they prey on animals like sharks, rays, bony fish, crustaceans, and squid. Their hammer-shaped head makes them better hunters than other sharks, and their wide eyes give them a better visual than most sharks.

Thresher sharks are known for their unique and dangerous tails in the sea, which are as long as their body which they use as a hunting weapon. Using a whip-like motion, the rushes stun and even kill small fish prey, and this technique is known as tail smacking. With their brilliant tail, they can kill seven small fishes at a time.

A thresher shark’s caudal fin makes it easy to identify, and they are often found in warm and moderate offshore waters. Due to their meat and skin being hunted, or for soup made from their fins, Thresher sharks are endangered.

Bull sharks are not very dangerous looking as other sharks but let me tell you, they are known to be the most dangerous sharks to humans. However, shark attacks are sporadic, but still, they are notorious for their hostile nature.

Bull sharks can be found in the warm shallow water of all the world’s oceans. They are known to be fast and agile predators and can eat anything like fish, dolphins, and even other sharks too. As a result of their widespread hunt for their fins and oil, bull sharks are considered vulnerable.

Blue sharks, also known as the great blue shark, are thought to be the most widespread oceanic sharks. They are highly migratory species and distributed across the world in moderate and tropical oceans.

Due to their body being deep blue from the top and white from the bottom, it is nearly impossible to see them. Many blue sharks are killed each year in fish practicing or making shark fin soup.

The world is home to hundreds of diverse species of sharks, which include a variety of sizes, shapes, and colors. These amazing creatures are now facing the threat of extinction, but there are many ways you can help them and protect these sharks from extinction. One of them is by knowing the different types that exist, where this article discusses the 7 types.

If you want to go on a shark adventure, check out where sharks are mostly found in Florida.