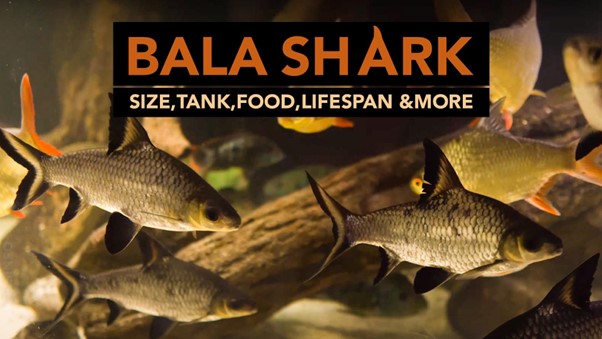 Bala shark, also known as silver shark and tricolor shark, is a fish that due to its torpedo-shaped body is called a shark, however, it is not a true shark. It belongs to the genus Balantiocheilos in which there is only one other specie than the bala shark. It is a popular aquarium fish and here is your guide about the bala shark and its tank requirements.

Bala shark is pretty to look at as it has an elongated and torpedo-shaped body. Its caudal fins are deeply forked while the edges of all the fins have front zones yellow or orange in color with a mix of deep black at the end of the fins.

The body of the bala shark is silver in color but its defined scales do shine with different vibrant colors. They have big eyes on their bodies which they use to find their prey.

The bala shark is most commonly found in aquariums as it is one of the most-loved sharks when it comes to displaying beautiful sea animals. Other than that, in the wild, they are found in the region of  Sumatra, around the Malay Peninsula, and in Borneo.

Though it is a misconception that the bala shark, being a good fit for an aquarium will remain small just like when they are captured, it does grow big as much as 14 inches in length. That’s why it’s necessary to have an aquarium suitable for its appropriate growth. The adult bala shark can weigh around 2.3 pounds.

Bala shark is an omnivore and in its natural habitat, it generally feeds on algae, larvae, insects, plant portions, and crustaceans. During captivity, they are fed frozen foods like dry fish, flake foods, pellets, dried plankton, bloodworms, vegetable matter, shrimp, and dried fruits. Their diet shall be kept in check for their proper growth and all the nutrients, majorly protein, shall be provided in sufficient amounts.

The bala shark goes for external fertilization as the female bala shark upon sexual maturation lays an egg and the male comes around to release sperm on them for fertilization. Once the eggs are laid by females, they don’t nourish or take care of them rather they prefer to live on their own and the newly borns manage their survival on their own.

Nothing is sure about the breeding frequency of the Bala shark so it’s hard to decide on their lifespan, however, with proper care, the Bala shark can live for 10 years or more, on average.

The conservation status of the Bala shark is Vulnerable, according to the Redlist shared by IUCN. Some other concerned authorities also believe that the specie is Endangered.

During captivity, bala sharks need to be in clean water otherwise they might experience various diseases. The aquarium trade is a major stakeholder in pushing this specie towards extinction as bala sharks are targeted during the breeding season and this is taking a toll on their population count.