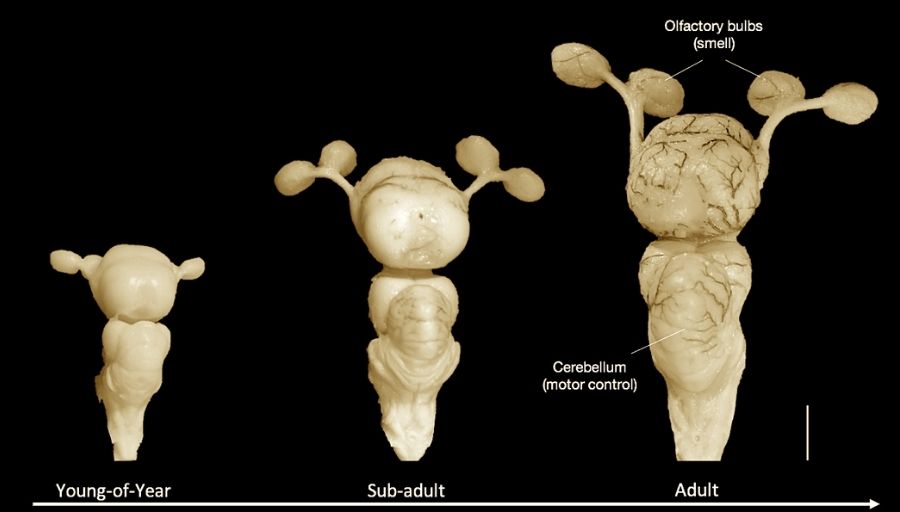 Sharks have been perpetuated as mindless eating machines for decades. Scientists have substantially underestimated the neural potential of sharks and limited their brains within the circle of simplicity and relatively assumed it insignificant. But sharks are very dexterous in adapting to environmental changes and play a great role in variations followed by evolution.

Interestingly, the neural anatomy of a shark is greatly based on its habitat or lifestyle rather than its genetic make-up. Depending upon the species, the brain of a shark varies in size to a great extent. Surprisingly, some very enormous and complex species of sharks have the tiniest brain, while the small and less complicated species are found to have brains as huge as their entire body.

Mostly, the shark’s brain is Y-shaped and made up of billions of neurons. Sharks that prefer to live peacefully and are not ruthless predators have smaller brains as compared to those who are stealthy hunters. The shark’s brain is composed of different regions. Let’s have a look at the shark’s neuroanatomy.

Just like a human brain, the shark also has 3 regions of the brain, which are the Forebrain, Midbrain, and Hindbrain, which in addition consists of several specialized regions as well.

Hypothalamus is important in regulating many functions essential to the survival of sharks. It releases many chemical stimulators called hormones that control the regulation of heartbeat, respiration, metabolism, thermoregulation, osmoregulation, food intake, digestion, and even biting.

On the other side, the hypothalamus also governs the pituitary gland. The pituitary gland also releases a wide range of hormones that work almost on every part of the shark’s body. It maintains homeostasis, blood pressure, metabolism, blood sugar levels, growth, the well-being of kidneys, calcium levels, estrogen, progesterone, testosterone levels, uterine contractions, ovulation, and a lot more.

Midbrain is relatively small and has been created for visual output. There is a prominent protrusion in the midbrain which contains the optic lobes responsible for vision.

The hindbrain is the most important part because it regulates almost all involuntary activities. The hindbrain can be classified into Cerebellum, Brainstem, and it also contains a brain center known as the amygdaloid nucleus, which is responsible for spontaneous fight and flight conditions.

The cerebellum is a relatively very large and well-developed part of the brain of a shark. Along with this, it is highly convoluted, making it a very complex part of the brain. It is present anteriorly to the brainstem. The cerebellum is mainly responsible for muscular coordination and control. It is more developed in those sharks, which are very swift hunters, than those who prefer to live peacefully. It is because of the cerebellum the shark proficiently maintains its buoyancy.

The brainstem is present at the base of the shark’s brain. It is covered by the posterior cranial nerves. Among these cranial nerves, some are responsible for conveying the message and play a role in the main sensory pathway. These nerves take a message from the shark’s inner ear and electro-sensory system and pass it to the central region where it is read and recognized. The central nervous system will then send a command through motor nerves. The brainstem then continues into the spinal cord.

Olfactory bulbs are scent-detecting organs and are exceptionally well-developed in the brain of the shark. About two-thirds of the region of a shark’s brain is dominated by olfactory bulbs. This is why their sense of smell is out of the world. As compared to the human sense of smell, sharks can sense blood scent as much as a hundredfold. Moreover, a shark’s brain is responsible for many other specialized functions.

How does a shark brain work?

The brain of the shark performs a wide range of functions. The brain of a shark is responsible for performing many life-sustaining functions. It is highly efficient in muscular control and coordination, which makes it maintain buoyancy. Cranial nerves bring the message to the forebrain, where it is processed and passed to the motor system in the form of commands.

The forebrain controls behaviors and emotions and also contains the hypothalamus and pituitary gland that performs life-sustaining processes. The midbrain plays a pivotal role in visual input. The ventricles contain cerebrospinal fluid, which is a shock absorber and protects the brain from sudden traumas and injuries. The amygdaloid nucleus prepares the shark for a fight and flight activity. That is how the brain controls each and every aspect of a shark’s body.

Assuming a shark as a mindless killing machine was the greatest mistake of scientists. Sharks’ brain is capable of performing several life-sustaining mechanisms. Although there are variations in the size and weight of brains of different species, a shark’s brain is an incredible organ that drives complex behaviors and a series of fascinating functions. Sharks’ incredible features have never failed to amaze human beings, and because of this, they are the absolute Sultan of the Ocean.