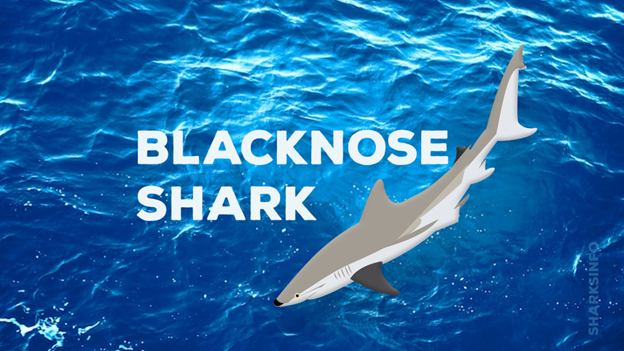 The black nose shark is named after its dark blotch near the tip of its snout, which often fades with age. However, people think it is permanent, and then they find it difficult to identify the species in the ocean. Along with this, there have been many speculations about the species’ size, behavior, and habitat.

To clear out, the article presents a brief overview of the species and its whereabouts.

An Atlantic tropical and subtropical requiem shark, the Blacknose shark, is common in tropical and subtropical waters. There is a dark tip on the snout of this shark, which makes it easy to identify. There is no inner dorsal ridge, but it has small pectoral fins and long dorsal fins. Its upper caudal and second dorsal fin tips are also dark in color.

Blacknose sharks are fast-swimming predators that eat small, bony fishes, as well as octopuses, squids, and other cephalopods including snails, clams, oysters, and scallops. Sharks of the requiem family, including the Blacknose shark, are viviparous. Breeding occurs in shallow areas such as coastal bays or mangrove swamps, where females give birth to litters of 1 to 6 pups.

In general, Blacknose sharks have not been implicated in human attacks; however, they should be treated with caution if they begin to display signs of aggression. During times of threat, this shark may exhibit aggression, such as through the head raised. Furthermore, the meat from these fish is sold dried as part of regional commercial trade, both intentionally and as bycatch. The fact that many of the sharks taken are immature may pose a greater threat to the population of Blacknose sharks.

Larger sharks prey upon Blacknose sharks, and they are overfished for food, both contributing to the decline of species. Globally, this species has been classified as endangered because its population continues to decline rapidly.

The Blacknose Shark is one of the smaller species of shark, growing to only about 4 feet in length. They are deep-water sharks, so their habitat is primarily in the Atlantic Ocean. They have a very dark grey color, which is one of the characteristics that give them their name