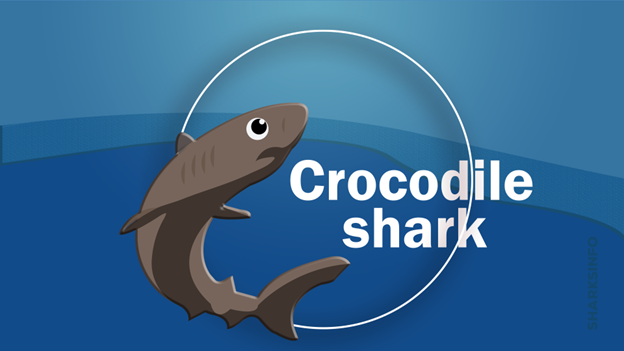 While their names may be similar, the crocodile shark is not the same as crocodiles and does not resemble them in any way, but rather it has its own shape, color, and habitat. Because of its sharp teeth and tendency to snap vigorously when taken out of the water, this species got its name. It is quite common for people to get confused, and therefore, to clear all misconceptions, this article is going to elaborate on all about the crocodile sharks that you must know.

Each litter typically contains four pups due to their ovoviviparous nature. Incubating unfertilized eggs or cannibalizing other young before birth may be common in this litter. There is no exact estimate of the gestation period, but it is believed to be long.

Range and Habitat of Crocodile Sharks

Tropical waters worldwide are home to the crocodile shark, a species that lives at a depth of more than 1,950 feet in the mesopelagic zone. During the day, crocodile sharks are rarely found above 660 feet of water depth, as they migrate closer to the surface to feed at night.

Crocodile sharks are fast-swimming and active predators based on their muscular structure and large tails. Having protruding and muscular jaws, crocodile sharks are carnivores capable of consuming a large amount of prey. A small bony fish, a squid, and shrimp are among the prey the species eats. There is, however, little information about their feeding habits.

In their birth state, crocodile sharks are 1.34 feet in length. Approximately 2.4 feet is the mature length of the male; whilethe female grows to3 feet at maturity. With this size, it makes its name in the list of the smallest shark species.

Small, slender sharks with large eyes, a large liver, and long gill slits possess many distinctive features. A crocodile shark’s small size, non-cutting teeth, and oceanic habitat make it not dangerous for humans, but its powerful bite causes caution among those who venture into its habitat.

As a result of its small size and poor meat quality, it is usually discarded. However, its oily liver may be of value. There are no data on the crocodile shark’s population status, but bycatch mortality may be contributing to its decline. However, at this time, the species is listed as the least concerned by the IUCN.

Crocodile sharks are easily identified by their large mouths and their lack of nictitating eyelids. The gills extend to the top of their heads, which provides them with a distinctive look. While crocodile sharks are harmless and have never been implicated in human attacks, their bite can cause severe pain.