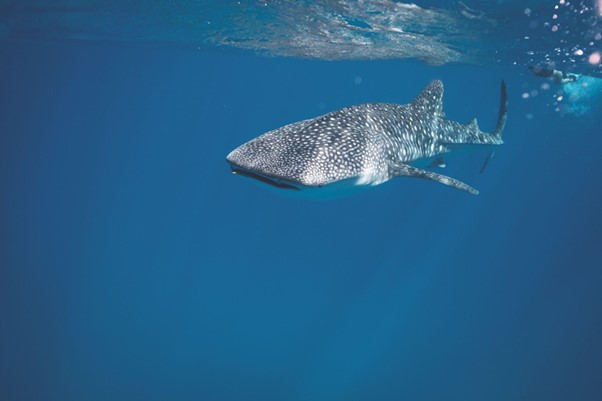 Whale sharks are known as the largest fish ever to live in the ocean water, they are huge but harmless species that are found thriving in the marine environment mostly in tropical waters. The whale sharks have a very peaceful and calm nature which allows divers to take a deep swim with them without any danger.

Let’s get into the details of Whale Sharks to explore more about their mode of living.

What is a Whale shark?

A whale shark is the largest fish in the ocean and belongs to the prehistoric Rhincodontidae family. The researchers believe that whale sharks have been living in the ocean for about 60 million years. The giant beast lives in tropical waters and inhabits water below 70 °F. These shark species are very friendly with the other creatures of the ocean and even portray no damage to humans unless or until they were provoked. Whale sharks are also listed as endangered species by IUCN.

Where on the Earth, have the Whale sharks been distributed?

What characteristic features do Whale sharks have?

Whale sharks have flattened heads with a small but blunt snout, just above the mouth – they have small barbels protruding out from the nostrils. The Whale sharks are grey to brownish from the sides and back and the rest of the body is lined with white spots pattern in horizontal and vertical strips. They bear a pair of dorsal fins that join the caudal fins located near the tail.

How long can a whale shark grow in length?

According to an estimate, the Whale shark can grow to an average length of 10 meters or 32.8 feet. However, some specimens of Whale sharks depict that they can exceed even more than 10 meters. On the coast of Pakistan, the largest species of Whale sharks were reported with a maximum length of 12.65 meters or 41.50 feet and is 7 meters or 23.0 feet in width. Incredibly giant creature.

What is the average weight of Whale sharks?

What food items are included in the diet of Whale sharks?

Whale sharks are filter feeders, which feed by keeping their mouths open letting the water enter into the mouth, filtering the food from the flowing water, and draining the water and fragments out into the ocean water. Plankton is their main course of food. Other than that, the Whale sharks feed on shrimps, algae, anchovies, mackerels, sardines, albacore, squid, and tuna. Moreover, the Whale sharks also feed on the eggs of the fish, they even wait for the fishes to brood on reefs so that they will lunge on the eggs.

What is the average life expectancy of Whale sharks?

According to the IUCN (International Union for Conservation of Nature), 63% of the Whale shark population has decreased in the last past 75 years and has been thought to decline more in the coming 30 years. Many factors affect the population of shark species such as human activity, habitat destruction, climate change, and pollution – all factors contribute to reducing the population of Whale sharks because of which the shark species are categorized as endangered.

The Whale sharks are the largest species of the shark’s kingdom which belongs to the group of prehistoric Rhincodontidae family. Whale sharks have been thriving in the ocean water for more than sixty million years. All over the globe, the species have been widely distributed. The species have a maximum length of 10 meters and weigh almost 9 tonnes. They are filter feeders and prefer planktons as their main food item. Moreover, the average life expectancy of Whale sharks is 70 years but few specimens have also been recorded with the age of 100 to 125 years. That’s all about Whale sharks and their mode of living. If you want to explore more about Whale sharks, why don’t you take a deep dive with them in their hometown?