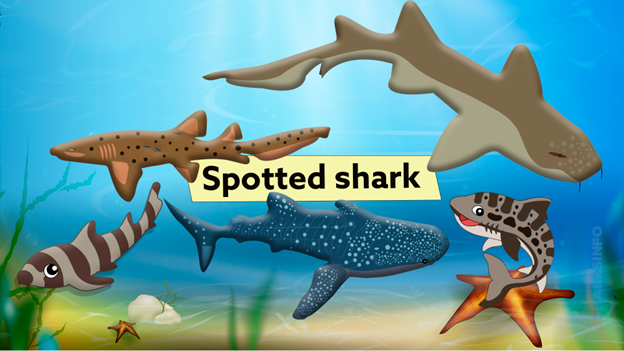 Sharks are some of the most ferocious creatures in the animal kingdom. They have been feared and revered by humans for centuries. But their reputation as mindless killing machines is way off the mark. There are over 500 different species of shark inhabiting the world’s oceans, and each one exhibit different attributes and behavior.

There are, however, a few species of sharks that are easy to classify due to their exceptional spots on the skin. Referred to as the spotted sharks, what possessed them to have spots, though? Is it a disguise that they use to trick their prey? or are they just plain ugly? We are going to find out.

What kind of Sharks has Spots?

Sharks are the top hunters of the ocean, and there is a tremendous variety in their appearance. From the streamlined, fast, and powerful great white shark to the slow, bulky whale shark, they all look very different. One particular difference is the spots on the shark’s skin which defers them from all other species. Most sharks don’t have spots, but only a few of them, out of which most belong to the family of carpet sharks.

Orectolobiformes is the name given to a family of sharks classified as carpet sharks. Seven families make up this tiny order.

In shallow coastal waters of Australia’s eastern coast, blind sharks can be found up to 360 feet deep. The nostrils are covered in long barbels, which make them distinct. As their name implies, blind sharks aren’t blind, but they close their eyes when taken out of the water.

A nurse shark is generally found inshore in bottom-dwelling habitats. As opportunistic predators, nurse sharks prefer small fish and invertebrates as their primary prey. Large species can reach as much as 14 feet in length, and they attack humans only if they are openly threatened.

Their largest species measures only 48 inches in length, making them relatively small sharks. The tails of these animals are exceptionally long, exceeding the length of their bodies as a whole. They feed on bottom-dwelling fish and invertebrates.

The symmetrical patterns on the wobbegong sharks resemble a carpet, which helps them blend into the environment. In general, wobbegongs are not dangerous to people unless provoked, as they spend a great deal of time on the sea floor resting.

With an adult length of no more than 3 feet, they are relatively small sharks.

They grow to over 40 feet in length and weigh over 20 tons, making them the largest extant fish species. Whale sharks, with their largemouth filter feed and primarily eat on plankton.

On a pale background, zebra sharks have a pattern of dark spots on a body of five longitudinal ridges. Their main mode of life is nocturnal, and they spend most of the day on the bottom of the ocean, resting motionless. There is no danger to humans from them.

Well, aside from the family of carpet sharks, there are a few more species having spots on their skin, such as small-spotted catsharks. As such, these spots serve only as identification markers for sharks and for no other purpose.

A shark’s skin is made of tiny tooth-like scales called ‘dermal denticles’ that you can see if you look closely enough. These skin scales are arranged in rows and make the skin very hard and smooth.The spotted shark has a unique way of protecting itself from predators, using its ‘spots’ as a form of camouflage. It is believed that this ‘spotted’ appearance is an anti-predator defense mechanism to protect the shark from predators. Not all sharks have spots on their skin but only a few, such as the species in the family of carpet sharks.