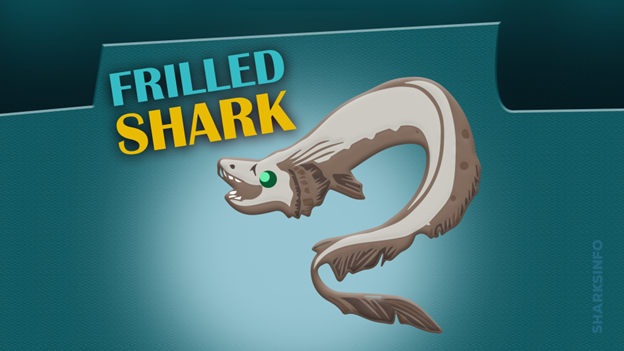 Despite their mystery, sharks make for the most fascinating oceanic creatures; for instance, take the frilled shark, which is a sort of real-life sea serpent. The body of this enigmatic shark resembles that of an enormous snake, and its mouth is filled with toothy protrusions. However, despite the unique appearance and characteristics, comparatively, little has been known about the species.

However, this article is going to talk in detail about the species known as the frilled shark.

Generally, we refer to animals by their common names, but if you are interested in shark research or want to be specific, it is preferred to call them by their scientific names. Science is more than names; there are many other things that matter as well. So, why not begin with the scientific classification of the species?

A wide-ranging but erratically distributed species of shark, frilled sharks occur throughout the oceans in both the Atlantic and Pacific. They usually reside between rock bottom of 330 and 4200 feet, so people hardly ever see them unless they endeavor to the surface.

In appearance, frilled sharks are long, and slender, and have an elongated tail fin, giving them an eel-like look. In addition to their small single dorsal fin and six pairs of arched gill slits (most species of sharks have five gills), they also have a caudal fin without a lower lobe. With a short snout and a long lower jaw, these sharks are able to open their jaws very wide. A trident-shaped jaw has 300 needle-shaped teeth with two cusplets on each side.

Fish (mainly bony) and cephalopods (mostly squids) are the main diets of frilled sharks. However, they also feast on slugs and other species of sharks. They seem to capture active, fast-moving squid by preying on the tired and dying squid after spawning, and their long jaws make them capable of devouring prey larger than themselves.

As if trying to catch prey, they may curvature their bodies like springs and may launch quick strikes like a snake.

Considering the length and articulation of frilled sharks’ jaws, it appears that they cannot deliver a powerful bite similar to more conventional species. In spite of this, escaping would be essentially impossible due to their needle-like teeth and many rows of them.

In terms of reproduction, Frilled Sharks are ovoviviparous. The female Frill Shark gets one clasper inserted into her body by a male shark to facilitate sperm transfer. After more than a year of gestation (which can last as long as three and a half years), the young hatches from the eggs inside the female.

Usually found in deep waters, Chlamydoselachus anguineus is among the slowest shark species. They live in solitude and mostly hunt during the night. The sharks may be taken as fishing bycatch, but otherwise, they do not often come in contact with humans. Despite their snake-like appearance, humans are not at risk from frilled sharks.

This species of frilled shark was once considered a near-threatened species mainly because of slow reproduction, overfishing, and deep water habitat. However, the IUCN listed the species as the least concern.

Frilled sharks, C. anguineus live in deep, dark waters below the surface of the ocean and have a prehistoric appearance. Humans rarely encounter frilled sharks, which may be because they are naturally rare. There is nothing dangerous about these sharks that humans should be worried about, but their teeth may cause scratches to fishermen inspecting or holding them.